In studying the relationship between income and consumption, it is common to sort the observations by income and observe that high-income households have lower levels of consumption per dollar of income than low-income households, i.e., they have higher savings rates. This conforms to one's naive intuitions about the relationship, whether you think the higher income is the cause or consequence of the higher savings rate.

I recently took a commonly used consumption data set (the U.S. Survey of Consumer Expenditure), and sorted it into deciles based on aggregate consumption. After this sorting, the decile with the highest consumption had the lowest savings rate. In fact, they dissaved by a considerable margin.

I am looking at some real reasons why this might be true in the period in question (e.g., drawing down fictitious wealth from the housing bubble), but it seems to me that I might get the same result if income and consumption were both observed with error, that is, if the errors were not too highly correlated.

Suppose that this is true, and that the errors (or the percentage errors) of household income and consumption are uncorrelated with the true errors. How might I estimate that relationship correctly? And more specifically, can I estimate it correctly groupwise, for, e.g., income deciles or consumption deciles or quintiles? (Here I use "deciles" to refer to the groups of sample observations divided by the decile break-points, rather than by the breakpoints themselves).

Some of your phrasing is slightly strange such as "Suppose ... that the errors ... of household income and consumption are uncorrelated with the true errors" but your underlying point is sensible. Here are some numbers artificially simulated so "income" and "expenditure" have similar distributions and are highly correlated ($r \approx 0.91$): 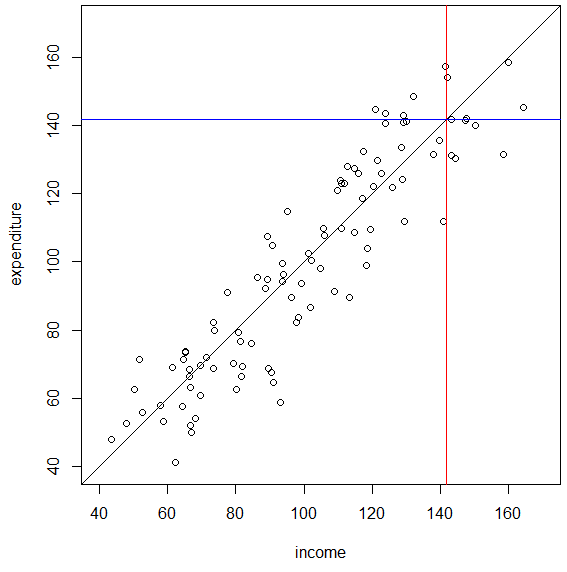 In real-life there is also a timing issue. People may have lumpy expenditure, and some have lumpy incomes. Individuals whose large expenditures fall in the survey period will appear to have negative savings, while those who do not may appear to have positive savings, even if both tend to average to zero over time. There can also be a wealth effect: in the UK, it known that those with almost no reported income tend to spend more in absolute terms than those with incomes close to levels of welfare benefits: the former group tend to be wealthier and are using wealth rather than income to fund their expenditure.

One approach to address some of these issue could be to define the "richest 10%" by some combination of income and expenditure, which might catch both both the high-income miserly individuals and the high-standard-of-living profligates. Some of the points discussed in or linked from the Wikipedia article on regression dilution though once a model becomes non-linear then it can become very difficult.

Not the answer you're looking for? Browse other questions tagged quantiles order-statistics group-differences or ask your own question.

19
What are the advantages / disadvantages of using splines, smoothed splines, and gaussian process emulators?

6
Are sample means for quantiles of sorted data unbiased estimators of the true means?
0
Comparison of means for individual vs consensus
1
Calculating quantile for inverse transformed Gamma
2
Proper names for data - quantile and rank
8
$\min(x)$ as a quantile estimator for the 1% quantile of $x$
0
Are there two different possible meanings for a quantile group?