How to reason about causal effect in time series when the treatment group reacts even before treatment?

I'm running into a strange phenomenon about treatment effect and causality that I'll try to recreate here. Let's say I'm doing an observational study: Do people spend more time online as a result of blocking ads? Maybe by removing ads, people have an increased enjoyment of being on the internet, so they spend more time browsing each day. Therefore, I'd like to measure the causal effect of ad-blocking programs on internet usage.

Since it's an observational study and people download ad-blocking programs on different days, I split the treatment group into subgroups by which day they downloaded them (so in a month I'll have 30 subgroups). I also take a control group (people who never block ads) on the same day. Let's also assume this control group is a reasonable approximation for the treatment group's counterfactual (i.e. how the treated group would have responded had they not blocked ads) I plot the average daily internet usage of both groups for an arbitrary day: 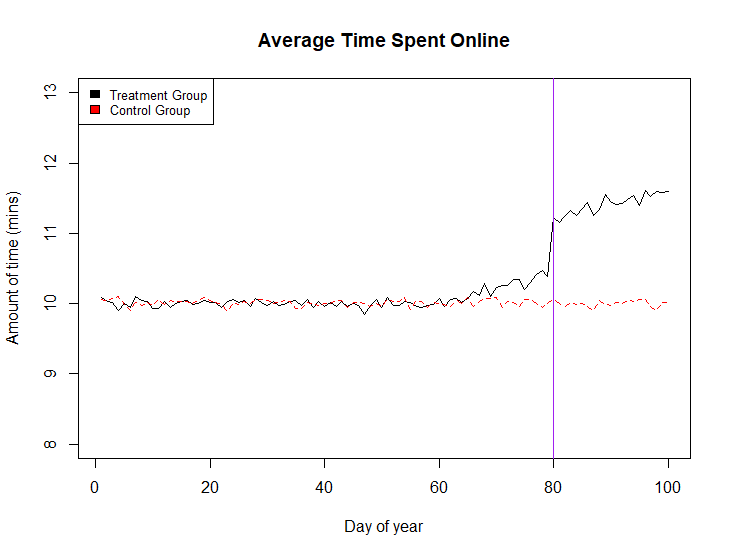 The vertical line is when the treated group started to block ads. I see that after the line, there is an increase in the treated time series as compared to the control time series, which is expected. However, there is a slight increase happening even before that line! In fact, this is happening for all 30 pairs of treatment/control subgroups. It looks as if people are reacting to the treatment even before it is applied, which can't be possible.

In this context, I might explain as follows: A few days before installing the program, some person happens to be spending an increased amount of time online, and as a result he is getting more and more annoyed by ads. After a few days, the person is so annoyed he finally decides to just install the ad-blocking program. Afterwards, he's more satisfied, so he spends even more time online than he did before. In this case, the treatment (ad-blocking) did not directly affect the pre-treatment response, yet it is correlated with it.

How would I go about estimating the causal effect of the treatment on the time series when there looks like a change in response occurs even before the treatment is actually applied? Also, is there a name for this phenomenon?

I think that pre-treatment rise is not attributable to the treatment effect---however, isn't it a form of selection bias between the two groups that should be accounted for? If this rise didn't exist, I could do a simple approximation of the causal effect by doing a difference between treatment and control, but I don't know how to handle that region. I also tried using CausalImpact, but the predicted counterfactual actually follows that pre-treatment lift, which seems inappropriate.

This is very similar to something called "activity bias" in the advertising literature, where people are exposed to more ads because they are just doing all kinds of stuff on the internet, including buying things. This tends to exaggerate the effect of advertising, like it does with AB.

One solution is propensity score matching, where you include time spent online 20 days before installation in the PS equation, in addition to other static variables like types of sites visited, demographics, etc..

You can also convert time so that zero corresponds to AB installation, so you don't have to treat each day in isolation and get a bigger sample. In that case, you may want to use dummy variables for calendar time (month, week, or day of the week dummies depending on what the actual seasonality looks like) in the PS equation.

By matching on the lags of the outcome in the PS equation, this will help you find better counterfactuals than simply picking people that did not install a blocker at all. This will be more of an apples to apples comparison, since you will be comparing people with similar usage and discarding inactive users by enforcing the common support. There are still bias stories you can tell about selection on unobservables (having a friend tell you about AB makes you install it, but then you also spend time playing video games with him or commenting on his FB page), but this is more credible especially if you have rich data about the users.

Not the answer you're looking for? Browse other questions tagged time-series causality treatment-effect observational-study causalimpact or ask your own question.

3
Continuous Treatment effect to assess the impact of Early vs Late treatment
3
Difference between using propensity score matching and CausalImpact for causal inference?
5
How exactly to evaluate Treatment effect after Matching?
1
How to compare treatments in multitreatment setting of observational treatment study
2
How to determine an appropriate "closeness" threshold when matching for causal inference?
2
Inferring causal effects on a time series from a forecast
3
Causal inference where potential outcome is somehow "violated"?
1
How to test a treatment had a positive effect on the experimental group?