I hope the title accurately reflects my question.

I have an independent event, with a 98% chance of occurring.

Now, I observe and record the outcome of this event 100 times.

What is the probability that there is a single run of 17 consecutive occurrences?

Put another way that I don't think changes the question, given an unfair coin with a 98% chance of landing on heads, after a hundred flips, what is the probability that the coin landed on heads 17 consecutive times?

Per whuber's questions, use the following clarifications:

Do you need an analytical expression or will a simple simulation suffice ?

Histogram of the distribution of max run length is: 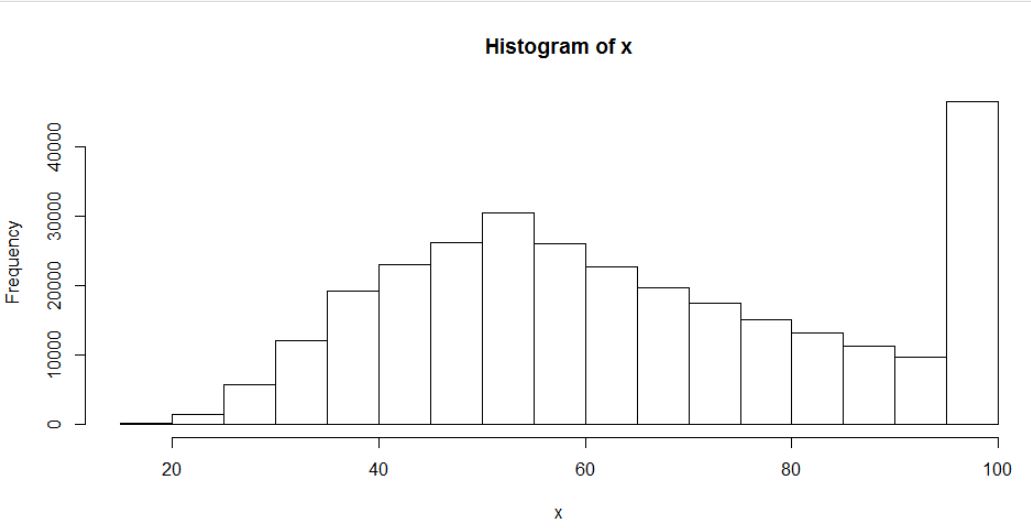 As you can see the probability of the maximum run length being <= 17 is incredibly low with our simulation probability being 3.666667e-05 (though that massive uneven spike of probability at max_run = 100 makes me feel like I've probably got a bug in my code)

Not the answer you're looking for? Browse other questions tagged probability rare-events runs or ask your own question.

8
Can a fair coin test be applied to a coin that often lands on its edge?
28
What is the name of the statistical fallacy whereby outcomes of previous coin flips influence beliefs about subsequent coin flips?
8
How to Prove that an Event Occurs Infinitely Often (Almost Surely)?
3
I know the probability of an event to occur, so how do I find how many times the event must be attempted to get a reasonably chance of success?
2
Coin toss and number of groups
1
Tossing a fair coin 100 times, could the probability of some specif events be less likely to happen?
0
To find the conditional probability of heads in a coin tossing experiment