I'm really sorry if this question is too basic, but I've been looking for a while and haven't been able to find a convincing response. My statistics background is rather poor.

Now suppose that $p_i$ is an iid random variable, and a different realization of it for every single Bernoulli trial (as opposed to one for each Geometric or a constant value,) following a continuous distribution defined in the interval $[0,1]$ with $E[p_i]=\bar{p}$ known.

There is a related question here, but the $p_i$ are deterministic, making it a different problem, I think.

Thanks to whuber's comment and Glen_b's question, I realize I might have explained myself a bit ambiguously.

What I'm saying is the $p_i$ are redrawn for each independent Bernoulli trial, not just for each realization of the Geometric variable (which could imply several trials with the same success probability.)

I also run simulations. I know this does not prove anything, but for what it's worth, I report them here: 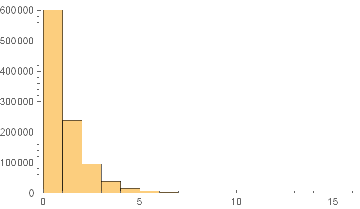 Your algorithm independently draws a sequence of probabilities from random variables $P_i$ with distributions $F_i.$ Since these distributions must be bounded between $0$ and $1$ they all have expectations $p_i.$ It then observes a parallel sequence of independent Bernoulli$(P_i)$ variates $X_i,$ stopping the first time an outcome of $1$ is observed, and returns the number of zeros encountered along the way. Let's call this random variable $Y.$

Because the $P_i$ are independent, the expectation (taken over the process $(P)$) is

Suppose now that all the expected probabilities $p_i$ are the same, equal to some common probability $\bar p.$ The preceding simplifies to

It may be instructive to contrast this procedure with the very similar one in which you draw $\bar p$ at the outset of sampling the $X_i,$ effectively generating one realization of a Geometric distribution of parameter $\bar p,$ and then repeat this for new, independent values of $\bar p.$ The result is not a sample from a Geometric distribution, as you can see by considering this modification of the code: 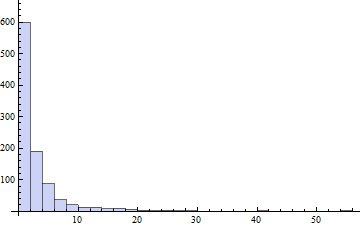 The tail is too long to be Geometric.

Replacing the While loop in g by a direct generation of $Y$ via GeometricDistribution was essential because sooner or later f[] will produce a very tiny value of p and the loop will go on for an extremely long time before a success ($1$) is observed. Using a loop becomes too inefficient--but it also helps us understand better how the modified process differs from the original one. In the original it's unlikely that the loop will go on for very long (assuming the values of f aren't concentrated near $0$), because different probabilities are generated at each step, thereby assuring it won't be caught trying to generate an extremely unlikely success.

My main question is: Is X still distributed Geometric?

But my probability skills won't let me confirm or reject this.

Simulation is sufficient to see it. Try simulating say 100000 values from either a geom(1/3) or a geom(1/9) with equal chance and see that although the mean is equivalent to a geom(1/6), the proportion of 1's (or of 0's if you index your geometric from 0) is wrong, and the sd is wrong.

However, it's relatively easy to do the algebraic calculations for the first point (or for the variance) for a simple case like that.

A complementary question is whether this is a well-known problem (or the solution uses a well-known theorem,) with a name. I suspect the answer may sound obvious to someone with a better statistics background than me.

Sure, people do this kind of thing with distributions; it has all manner of uses. Having a distribution on a parameter is a form of mixture distribution.

Not the answer you're looking for? Browse other questions tagged bernoulli-distribution geometric-distribution or ask your own question.

6
Number of Bernoulli trials to first success, with changing $p$

3
Why is the expected value of the number of trials before the first success larger than the number of trials with a 50% probability of success?
4
Designing an experiment: Geometric or Bernoulli data
0
Probability of a success at the k-th trial in N repeated Bernoulli trials
0
Minimal sample size for determining change in unkown success probabilities of independent Bernoulli random variables
1
Geometric distribution described with rate parameter
0
Probability of at least one success in a series of independent, non-identical Bernoulli trials
1
Geometric distribution with multiple trials