An application of AIC for non-linear models comparison

I am doing a comparison between two parametrical non-linear models with different amount of parameters. I am using Akaike information criterion (AIC) with the following formula:

where k - number of parameters, N - number of experimental points and RSS - sum of squared errors

Models describe physical property of the system which consists of 19 structural units and each of them have 3 (model 1) or 4 (model 2) adjustable bounded parameters.

If my calculation is correct, i should choose model 2, but what bothers me is that the amount of parameters here doesn't play a significant role, I could increase it up to 500 and the second model would still be better, which seems counter-intuitive. Is this calculation correct, or am I missing something important?

Let's examine this in an empirical way, with the objective of building intuition about the effects of sample size and differences between RSSs. We'll simulate many samples of size $N=(5128-57) = 5085$ from a Normal distribution with mean $0$ and variance $\sigma_1^2 = 17283/5085 = 3.399$, calculate $2k + N\log(\text{RSS}/N)$, plot a histogram. The numbers have been chosen to match those from the model 1 results. We'll repeat the exercise with numbers chosen to match the model 2 results, and, by comparing where the two histograms lie, we'll be able to see whether the two AICs really have any chance of being different due to randomness or not. 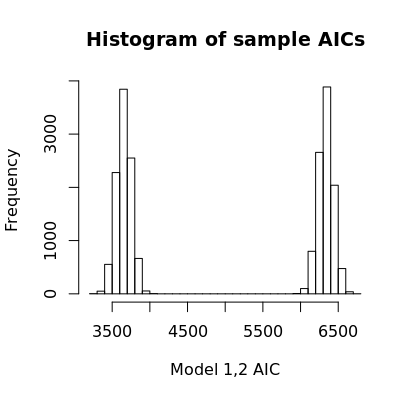 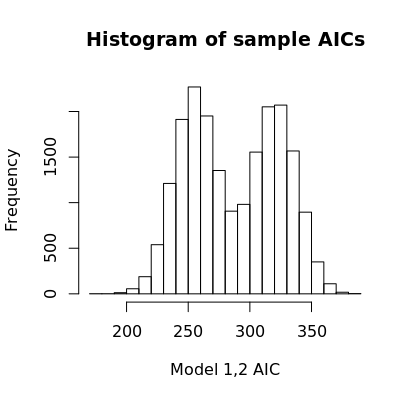 which still would favor model 2, but not by much.

In the second case, a quick series of calculations shows us that the two AICs will be roughly the same if the RSS from model 2 is $17155.4$, an 0.74% decrease from the model 1 RSS of $17283$. Given that the actual decrease is far greater than that, it's clear that Model 2 is a better one.

These experiments were performed with Normal distributions, and other distributions would give you different results - for example using a $t(3)$ distribution would cause the histograms to spread out a little - but, given the magnitude of the differences between RSS and the large sample size, the qualitative results wouldn't change.

Not the answer you're looking for? Browse other questions tagged regression nonlinear-regression aic or ask your own question.

4
Positive log likelihood values and penalty of more complex models when ranking models using AIC
4
Using AIC, for model selection when both models are equally weighted, and one model has fewer parameters
3
Determine the number of parameters of ARIMA models for AIC calculation
4
Determination of maximum log-likelihood of nonlinear model for calculation of Aikaike IC
7
AIC and its degrees of freedom for linear regression models
2
Calculating AIC for linear models in R
2
How to determine the best non-linear regression model? Metabolomic analysis of different tumor sites
1
Log-Likelihood Computation for AIC & BIC
1
Akaike Information Criterion I cannot interpret the result
1
What is the theoretical basis behind counting dispersion as an implicit additional free parameter in R's logLik() function?