In principal component analysis, is PC a linear combination of input variables or vice versa? 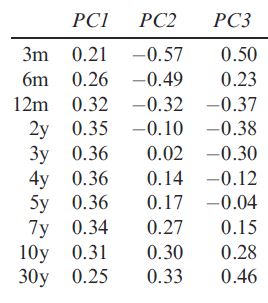 Consider the purpose: why do in finance we extract the principal components from interest rate series? One reason is that we plug the factors to recover the rates, i.e. we take the modified output of PCA to get the new inputs. This may sound strange, so I'll elaborate.

If you had just one interest rate $r$ on the portfolio, you could look at the risk measure of the portfolio $V$ called the duration: $$D=-\frac 1 V \frac{\partial V}{\partial r}$$

The problem's that there's more than one interest rate, like in your exhibit we have rates from 3 months to 30 years. So what is $\Delta \bf r$ vector then? Of course, you could go with a so called parallell shock, i.e. set all coordinates of the $\Delta \bf r$ vector to an equal amount. This is quite popular, and still in use, especially in unsophisticated institutions and regulatory exercises a lot. However, we could try something more sophisticated.

One way to come up with this vector (shock scenario) is to use PCA. It happens so that if we run it on historical realizations of changes $\Delta r_{it}=r_{it}-r_{i,t-1}$ of the rate tenor $i$, the first principal component PC1 will account for up to 80% of the variance. Thus we can use this component to build the interest rate shock scenario, e.g. we could take one $\sigma$ shock up as follows: $$\Delta \bf r=\lambda\sigma_1 PC1$$ Here $\sigma_1$ - the standard deviation of the first principal component score, $\lambda$ - standard deviation explained by PC1 and $PC1$ - the loadings that you show from Hull's book. We could also use this to construct yield curve steepening/flattening shocks by using the slope component PC2. PCA allows to do this kind of interesting scenario construction.

234
What are the differences between Factor Analysis and Principal Component Analysis?
0
Interpretation of a PCA plot

3
Which are the most effective methods for selecting independent variables?
2
Differences on exploratory factor analysis, confirmatory factor analysis and principal component analysis
4
Fundamental difference between PCA and FA?
2
Intuition About Principal Component Directions
4
How to interpret this loadings statement in PCA given the example in R?