Can an instrumental variable equation be written as a directed acyclic graph (DAG)?

Directed acyclic graphs (DAGs) are efficient visual representations of qualitative causal assumptions in statistical models, but can they be used to present a regular instrumental variable equation (or other equations)? If so, how? If not, why?

For example in the DAG below, the instrumental variable $Z$ causes $X$, while the effect of $X$ on $O$ is confounded by unmeasured variable $U$.

Yes, they surely can.

As a matter of fact, the SCM/DAG literature has been working on generalized notions of instrumental variables, you might want to check Brito and Pearl, or Chen, Kumor and Bareinboim.

The basic IV dag is usually represented as:

Where $U$ is unobserved and $Z$ is an instrument for the effect of $X$ on $Y$. Although this is the graph you usually see, there are several different structures that would render $Z$ an instrument.

For the basic case, to check whether $Z$ is an instrument for the causal effect of $X$ on $Y$ conditional on a set of covariates $S$, you have to check two conditions:

For example, consider the graph below, with $W$ and $U$ unobserved. Here, $Z$ is, conditional on $L$,an instrument for the causal effect of $X$ on $Y$. We can create more complicated cases where it might not be immediately obvious whether something does qualify as an instrument or not. 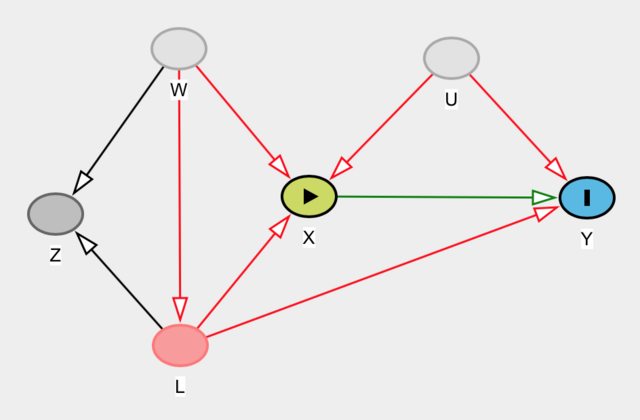 Not the answer you're looking for? Browse other questions tagged causality instrumental-variables dag or ask your own question.

27
Is there any theory or field of study that concerns itself with modeling causation rather than correlation?
12
Does direction of causality between instrument and variable matter?
2
Omitting a variable in IV estimation
0
How to explain instrumental variables to your friends?