I'm doing some research (I haven't studied anything related to statistics) and I have been stuck for a while now so bear with me:

I am trying to simulate data (generate data) based on empirical data. My empirical data is a list of 4276 numbers representing travel times ranging from 143 to 596 minutes. The available data is discrete in the sense that minutes is the smallest time precision. (everything is rounded to minutes).

You can see the estimated PDF (normalized frequency) distribution below. 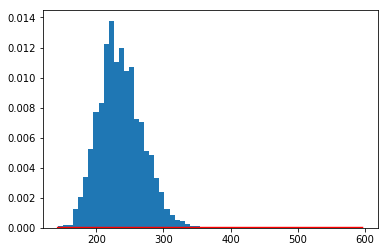 Now, I tried inputting the data in Arena's input analyzer and the best fit is a Gamma distribution.

I also tried fitting a Poisson curve as stated in this thread without any result:

Now I can imagine if I reproduce data starting from that Gamma distribution it will not meet the reality.

How would I go about fitting this data set where traveltimes under 350 (approx.) are represented much more in frequency than traveltimes above 350.

Am I allowed to group data > 350 to get a normal distribution or something like that?

I'm not really sure which way to go from here because I have not studied anything in that field and I am quite lost.

Another path I was exploring was: Keep simulating data until the simulated data would approximate the empirical data. I mean I would keep simulating until my $\chi^2$ of the generated and empirical data would be acceptable. But that was a bad idea because I am having multiple distributions in my simulation which resulting in excessive long simulation time...so not realistic.

I am trying to do all my analysis in Python. However, I did try the input analyzer from Arena to confirm results.

Hope this is even possible and I am eager to hear from you guys!

Ok, so you want to fit a reasonable$^{1}$ density to your data and then generate random values from its distribution. You consider Poisson or Gamma distributions as reasonable for your data.

A Poisson distribution is fully determined by its mean, $\lambda$, or equivalently its rate, $\frac{1}{\lambda}$. (I believe you switched these parameterizations in your first plot.)

The following plot lays the fitted Poisson and Gamma densities over a histogram of the raw data. 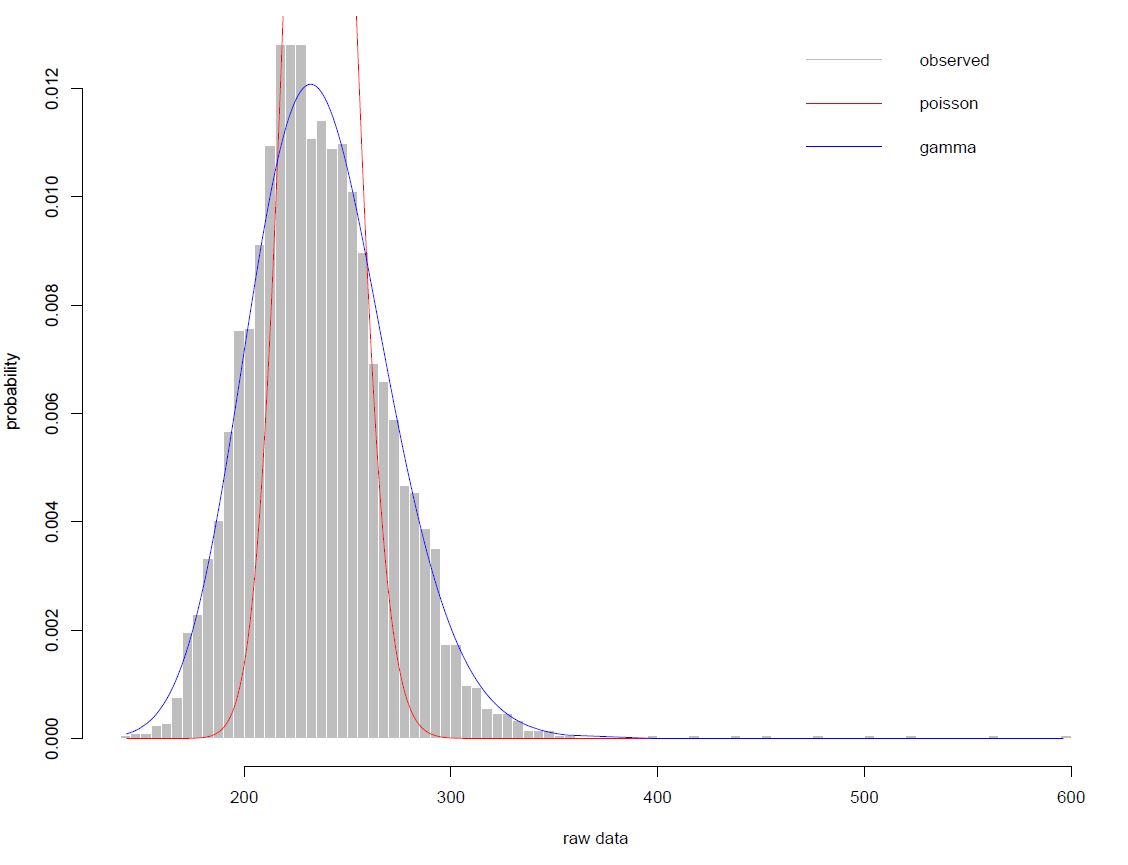 Eye-balling the plot, I would conclude that a Gamma distribution is a good fit and would be a better choice than Poisson.

In Python, numpy.random.gamma provides a sampler. Note that it parameterizes the Gamma distribution with shape ($k$) and scale ($\theta$) parameters. The scale parameter $\theta $ is equal to $\frac{1}{\beta}$.

${1.}$ Reasonable in the sense of coming from prior or domain knowledge. A left-truncated normal may not be a bad choice either in terms of fit, but could possibly be ruled out on other grounds.
Share
Improve this answer
edited Mar 21 '18 at 18:28
answered Mar 20 '18 at 13:49

Not the answer you're looking for? Browse other questions tagged distributions python poisson-distribution simulation or ask your own question.