I'm trying to fit a set of data to a variety of Poisson-based models, and have hit a stumbling block when trying to fit a piecewise-stationary Poisson process. What I mean by this is a Poisson process that has intensity $\lambda_1$ for time interval $T_1$, then intensity $\lambda_2$ for the time interval $T_2 = T - T_1$, where $T$ is the total observational period.

The likelihood function that I'm using for observing $N_1$ events in that first time interval and $N_2$ events in the second is:

If I fix the two intensities, $\lambda_1$ and $\lambda_2$, to be constant, and equal to their expected value based on the model (0.00445, 0.0556 respectively), then scan through various choices of $T_1$ we can see the one dimensional likelihood as a function of $T_1$ below. It shows that (as expected) the most likely hypothesis is one with $T_1 \sim 4500$ (dashed black line indicates the true simulation parameter). 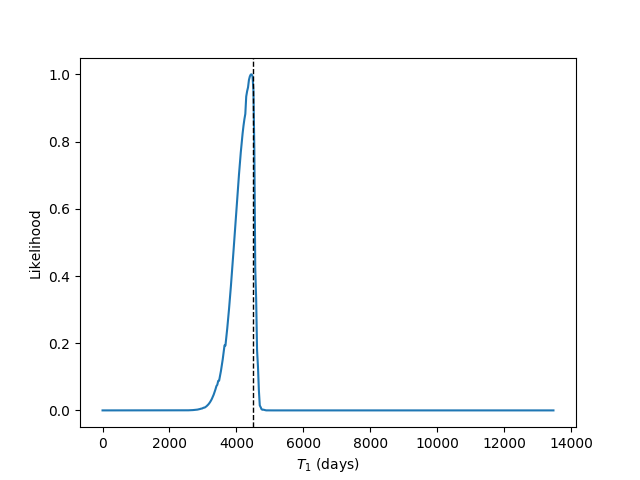 By marginalising over any two of the parameters, I should find the posterior distribution for the third parameter (up to a constant normalisation factor thanks to the uniform priors). I plot all of these, plus the 2D marginalised likelihood surfaces for all combinations of parameters below. 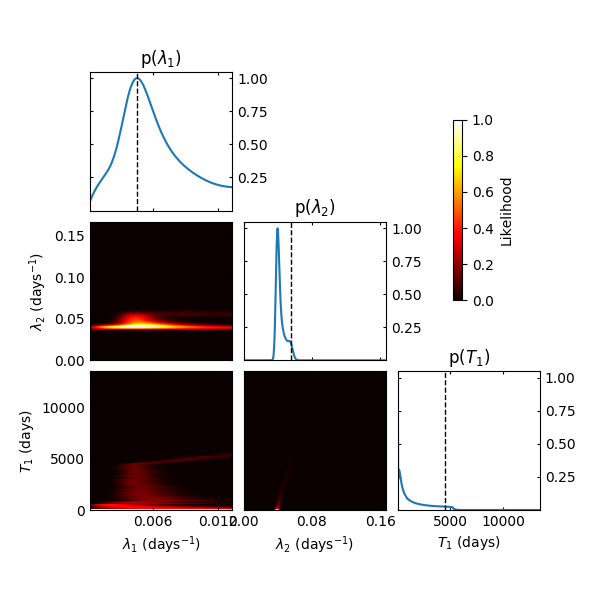 I'm not sure what's going wrong! The more events I test with the more extreme (sharp) the posteriors become, while getting no closer to the simulation parameter they should be estimating.

I then tried to visualise the likelihoods on a 3d grid (see the gif linked here, each point in the grid is coloured and transparencied in proportion to the likelihood at that point, yellow/solid being most likely while purple/faint being least likely) it's clear that the maximum likelihood points do lie on the $T_1=0$ plane. There is a very slight local maximum away from the boundaries of the likelihood grid (hard to see in the gif due to the coarseness of that grid), at the true simulation parameters, but it is 10 times less likely than the points on the edge, and it drops off fairly fast in any direction away from that local maximum.

Is this grid based method just the wrong way to go about this kind of test? Am I doing/missing something obvious/silly? Are the uniform priors causing problems? Do I have to move to a MCMC/other method for finding posteriors?

The way you have done it implicitly assumes there are two periods, one with rate $\lambda_1T_1$ and one with rate $\lambda_2 (T-T_1)$, but if you examine those expressions carefully, you will see that you are confounding the arrival rates $\lambda_i$ and $T$; you really only have two arrival rates in your likelihood function, rates which are functions of the three parameters $\lambda_1$, $\lambda_2$, and $T$, and two samples, each of size $1$.

To see this more clearly, let's rewrite your version of the probability distribution of the data: 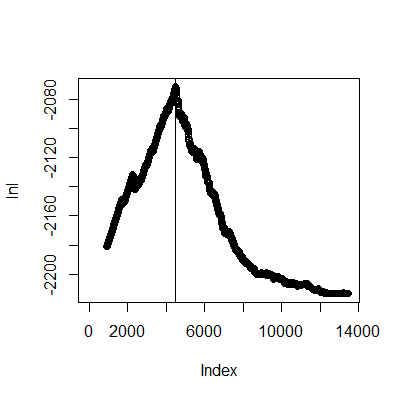 You can avoid the discretization into $13,500$ periods by converting the problem to one of estimating the parameters of the two exponential distributions for the inter-arrival times, but you would gain very, very little for a problem of this size by doing so.

ETA: Some question has arisen as to why the above code omits the factorials in the denominator. This is because they are functions only of the $x_i$, and, as such, don't change when the input values to the likelihood function change; they are constants, and can be ignored.

Consider the log of the likelihood function for a Poisson (which saves me typing relative to the actual problem):

Let's take the difference for two values of $\lambda$, an operation which occurs inside the deviance / AIC / BIC calculations:

as the two terms involving $\sum \log x_1!$ cancel out. It should also be clear that the maximum value of $\log \mathcal{L}(\lambda)$ will be achieved at the same value of $\lambda$ regardless of whether the additive term $\sum \log x_i!$ is included or not, and all the slopes and higher level derivatives will also be the same. Thus, performing the calculations with $x!$ adds nothing to our analysis except computational burden.

From a Bayesian point of view, consider the following posterior distribution:

where $p(\lambda)$ is the prior on $\lambda$ and $C$ is the unknown constant of integration required to make $f$ integrate to 1. Let's calculate $C$:

as the terms involving $x!$ cancel out. Note that $C'$ does not change if we leave $1/x!$ out of the denominator of the expression for $C$. This shows that we don't need to include the $x!$ in the first place; it will just be canceled out when calculating the constant of integration anyway, so it adds no value.

Not the answer you're looking for? Browse other questions tagged bayesian maximum-likelihood naive-bayes poisson-process or ask your own question.

21
What are the disadvantages of the profile likelihood?

6
Two poisson random variables and likelihood ratio test
3
Can someone explain this uncertainty estimation technique to me
2
Bayesian hypothesis testing of two parameters
13
When can't frequentist sampling distribution be interpreted as Bayesian posterior in regression settings?
3
Bayes Factor and likelihood for two sample from different distributions?
4
Bayes Factor for non-normal data
3
Are "improper uniform priors" in Bayesian analysis equivalent to maximum likelihood estimations?
2
How to write the log likelihood for the sum of independent poisson events