Why a large gamma in the RBF kernel of SVM leads to a wiggly decision boundary and causes over-fitting?

The hyperparameter $\gamma$ of the Gaussian/rbf kernel controls the tradeoff between error due to bias and variance in your model. If you have a very large value of gamma, then even if your two inputs are quite “similar”, the value of the kernel function will be small - meaning that the support vector $x_n$ does not have much influence on the classification of the testing example $x_m$. This allows the SVM to capture more of the complexity and shape of the data, but if the value of gamma is too large, then the model can overfit and be prone to low bias/high variance.

which is from here(the second answer). I do understand the first part, i.e. if gamma is large, the influence of a support vector won't reach far. However, I just can't figure out why a large gamma can lead to a wiggly decision boundary and capture more of the complexity and shape of the training data,causing over-fitting thusly. Any hint will be helpful!

where $\kappa$ is the kernel function, $x_i$ and $x_j$ are data points, and $\Phi$ is the featre space mapping. The RBF kernel maps points nonlinearly into an infinite dimensional feature space. 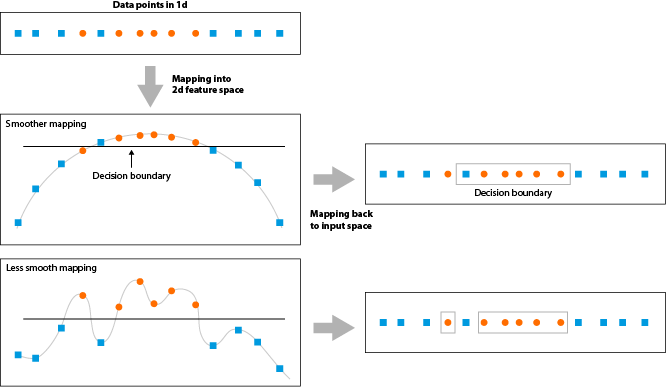 Not the answer you're looking for? Browse other questions tagged machine-learning classification svm hyperparameter rbf-kernel or ask your own question.

7
Is a lower training accuracy possible in overfitting (one class SVM)
6
Plotting the decision boundary of a kernel SVM (RBF)
7
What do these decision boundaries indicate in random forest and svm?
5
Is an SVM's (maximum) likelihood uniquely defined as a function of hyperparameters?
8
Where can I read about gamma coefficient in SVM in scikit-learn?
0
SVM gamma parameter influence : 2moons data set
0
What does it mean when the test error is nondecreasing as model complexity increases?