deviation from the trend on seasonal data

This is probably a pretty simple question for most of you.

I have weekly amount of users from last 2 year till now for 2 traffic sources. Want I want to figure out is to see in which periods these sources deviate from the trend. Regarding trends I do not know which model to choose.

Since the traffic is very seasonal I don't think a standard deviation will suffice. Which trend model is best to choose here or is there a better method?

I took the 64 weekly values for segment1 and coded them withiut loss of generality for clarity. 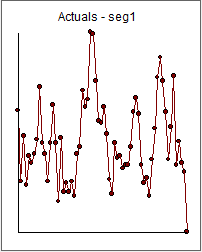 . In order to answer your question , I need to define "trend" and "deviate from trend ... anomaly"

The general definition of what a trend is : The general course or prevailing tendency”

From http://cucis.ece.northwestern.edu/projects/DMS/publications/AnomalyDetection.pdf Anomaly detection refers to the problem of finding patterns in data that do not conform to expected behavior. These non-conforming patterns are often referred to as anomalies, outliers, discordant observations, exceptions, aberrations, surprises, peculiarities or contaminants in different application domains. Of these, anomalies and outliers are two terms used most commonly in the context of anomaly detection; sometimes interchangeably.

I took your 64 values and using simultaneous identification strategies as I discussed here How to determine order of sarima? , I obtained the following useful equation presenting regular behavior (arima structure) and the empirically identified deviant structure (pulses).

. The Actual/Fit and Forecast (not asked for) is here

with a very clear rendition of the "deviate from normal" here

. The residuals from the model suggest sufficiency

An ARIMA model is simply a weighted average.It answers the double question: How many period (k)should I use to compute a weighted average and precisely what are the k weights. It answers the maiden's prayer to determine how to adjust to previous values (and previous values ALONE) in order to project the series (which is really being caused by unspecified causal variables). Thus an ARIMA model is a poor man's causal model .

in our case the "trend component" is a simple two period weighted average (k=2) of the past using the most recent value and the value three periods ago. The weights are 56.1% and -34.2% and a constant 781.864

shown for period 65. Note that in this form the prediction equation includes a slight adjustment due to the anomaly/pulse at period 64. 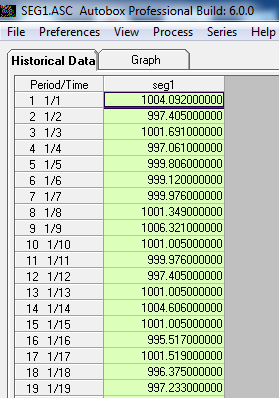 ... 64 numbers/values is to brief/short to validly identify/model seasonal structure although one could assume a model perhaps auto-regressive (seasonal arima) or seasonally deterministic (weekly dummies).

Not the answer you're looking for? Browse other questions tagged mathematical-statistics trend or ask your own question.

4
Why is auto.arima not capturing the obvious seasonality?
1
How to determine order of sarima?
1
Significance of a trend

8
Why can weather prediction be so correct?
1
Power of Seasonal Kendall Trend test
0
How do I know if this jump is going against the downwards trend?
0
Does the seasonality trend from timeseries decomposition changes over time?
4
Decompose a time series data into deterministic trend and stochastic trend
8
Analytically solving sampling with or without replacement after Poisson/Negative binomial
1
Irregular time series with multiple sampling sites
0
Measuring Strength of Trend and Seasonalities for Time-Series presenting Multi-Seasonal Patterns