I'm currently trying to figure out how to specify a generalized additive model in four different ways in order to investigate how my outcome variable changes surrounding different events. So what I want to model is

So far, I got this, which (if I got it right?) does not include any specification. It just represents the estimated population-level trajectories of my outcome variable surrounding the event (as "year" was event-centered):

This is my output plotted: 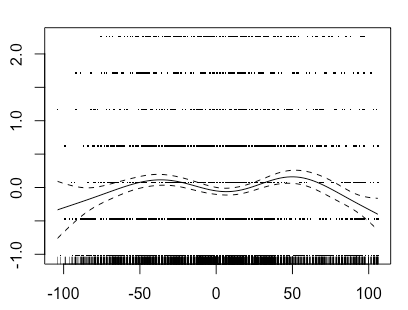 But how can I specify these four different models described above? Unfortunately looking at the mgcv documentation wasn't a great help to me.

Your help is highly appreciated!

You can add the following terms to the model:

You don't want to fit all these models separately and try to compare them with a LRT (via the anova method) as, for example comparing model 1 with model 2 will result in unreliable p-values that typically are anti-conservative. You are best served fitting model 2 and using the summary() method for a test of the random effect.

These are not the only ways to specify these models in mgcv; options include using mgcv::gamm() and gamm4::gamm4(), plus there are some other tricks; see paraPen argument to gam() and ?smooth.construct.fs.smooth.spec for some ideas.

Not the answer you're looking for? Browse other questions tagged r gam mgcv or ask your own question.