I'm looking to do a pre-posttest RCT comparing difference of means through a t-test, however I'm completely unsure how to calculate a required sample size using power, confidence level, and standardized effect size.

From my understanding I need to use this formula: 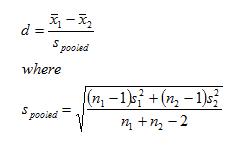 Then using this d value I can use a table to find the appropriate sample size. However, my main issue is determining the study to derive the X1 and X2 means in the formula from. Firstly, I'm assuming the test used to measure needs to match up (I.E. The study that I'm deriving the pre and post test means from need to use the same test as my trial, such as a VAS measure for pain) and obviously they both need to look at the same condition (Osteoarthritis in my case). However, does the study that I'm using the means from need to be completed on the same population and does the intervention need to be be the same dosage and duration or can a very similar dosage and duration be considered adequate?

Also, does the fact that I'm using an active control rather than a placebo have any influence on my calculation? How would modifying my trial to become a crossover design influence my sample size?

Thanks in advance, appreciate any support you guys can give me.

Let’s say we can locate the following values from the literature:
•  an estimate of the average VAS measure,
•  an estimate of the standard deviation of VAS,
•  an estimate for the pre- to post-test change in VAS, and
•  an estimate for the standard deviation of the differences.
We will need to locate reported data on comparable populations, but the idea of using effect size estimates is just that...and preliminary estimate.  Thus, getting a reasonably comparable population is sufficient.  Additionally, because we are hoping to compare the change in VAS scores, any reasonable intervention that has a measurable difference is a reasonable stand in.  (I.e., to assess if this new intervention is at least as effect as [blank], we would need a sample size of ___.)

Again, as the focus is on comparing the change in VAS scores for an intervention vs. no-intervention, we can assume that no-intervention results in zero change.  Thus, $\bar{x}_2=0$.  $\bar{x}_1$ will be the estimate from the literature (3rd bullet above).

Lastly, if you are comparing an intervention to a different intervention, then you can argue that the effect size will be some portion of this target $d$, say 60%.  You can then use this rescaled $d$ in you power and sample size estimates.

I hope this is useful; happy to elaborate as need be.

Not the answer you're looking for? Browse other questions tagged sample-size epidemiology clinical-trials cohens-d or ask your own question.