What is the worst that can happen when the homoscedasticity assumption is violated in ANOVA?

This is a follow-up question I have after reviewing this post: Difference in means statistical test for non-normal, heteroscedastic data?

To be clear, I am asking from a pragmatic perspective (not to suggest that theoretical responses are not welcome). When normality among groups is present (different from the title of the question referenced above), but the group variances are substantively different, what is the worst that a researcher might observe?

In my experience, the issue that arises the most with this scenario is "strange" patterns in the post hoc comparisons. (This has been observed both in my published work, but also in pedagogic settings...happy to provide details of this in the comments below.) What I have observed is something akin to this: You have three groups with $M_1 < M_2 < M_3$. The (omnibus) ANOVA gives $p<\alpha$, and the pairwise $t$-tests suggest $M_2$ is statistically significantly different from the other two groups...but $M_1$ and $M_3$ are not statistically significantly different. Part of my question is if this is what others have observed, but also, what other issues have you observed with comparable scenarios?

A quick review of my reference texts suggest ANOVA is rather robust to mild to moderate violations of the homoscedasticity assumption, and even more so with large sample sizes. However, these references do not specifically state (1) what could go wrong or (2) what might happen with a large number of groups.

Group comparisons of means based on the general linear model are often said to be generally robust to violations of the homogeneity of variance assumption. There are, however, certain conditions under which this is definitely not the case, and a relatively simple one is a situation where the homogeneity of variance assumption is violated and you have disparities in group sizes. This combination can increase your Type I or Type II error rate, depending on the distribution of disparities in variances and sample sizes across groups.

A series of simple simulations of $p$-values will show you how. First, let's look at how a distribution $p$-values should look like when the null is true, the homogeneity of variance assumption is met, and group sizes are equal. We will simulate equal standardized scores for 200 observations in two groups (x and y), run a parametric $t$-test, and save the resulting $p$-value (and repeat this 10,000 times). We will then plot a histogram of the simulated $p$-values: 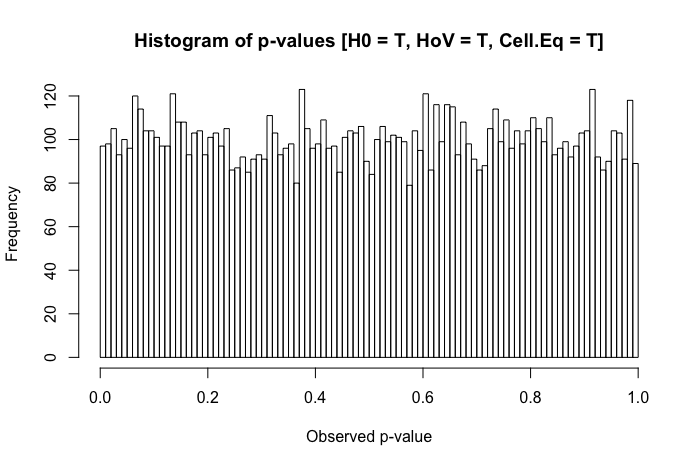 The distribution of $p$-values is relatively uniform, as it should be. But what if we make group y's standard deviation 5 times as large as group x's (i.e., homogeneity of variance is violated)? 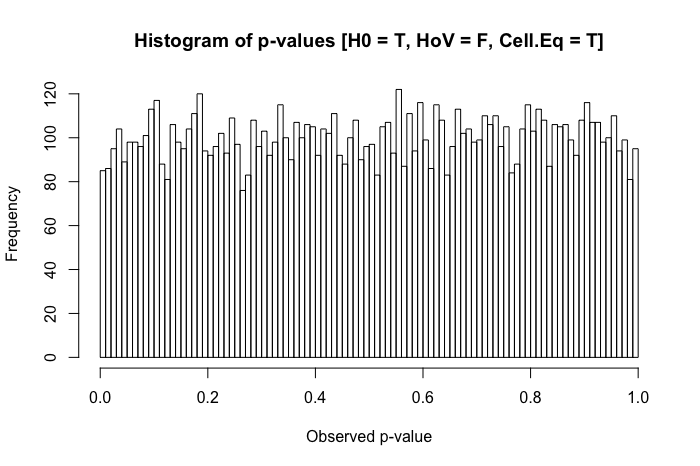 Still pretty uniform. But when we combine violated homogeneity of variance assumption with disparities in group size (now decreasing group x's sample size to 20), we run into major problems. 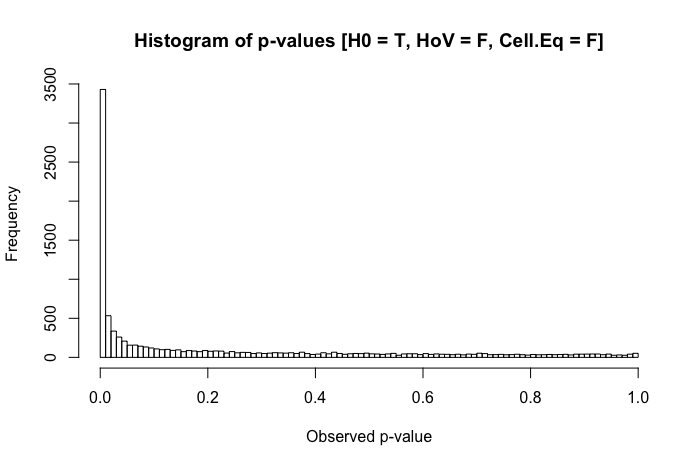 The combination of a larger standard deviation in one group and a smaller group size in the other produces a rather dramatic inflation in our Type I error rate. But disparities in both can work the other way too. If, instead, we specify a population where the null is false (group x's mean is .4 instead of 0), and one group (in this case, group y) has both a larger standard deviation and the larger sample size, then we can actually hurt our power to detect a real effect: 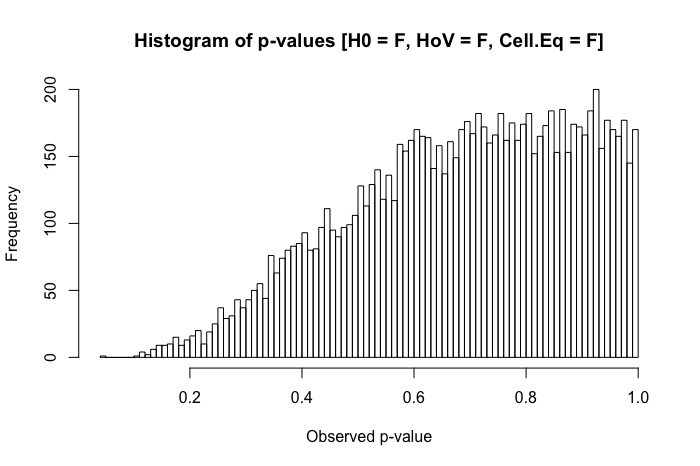 Gregg, do you mean for normal, heteroscedastic data? Your second paragraph seems to suggest so.

I added an answer to the original post you reference, where I suggested that if the data are normal but heteroscedastic, using generalized least squares provides the most flexible approach for dealing with the data features you mention. Not accounting explicitly for those features will lead to suboptimal and possibly misleading results, as you noticed in your own practice. How suboptimal or misleading the results may be will ultimately depend on the peculiarities of each data set.

A nice way to understand this would be to set up a simulation study where you can vary two factors: the number of groups and the extent to which the variability changes across groups. Then you could track the impact of these factors on the results of the test of differences between any of the means and the results of post-hoc comparisons between pairs of means when you use standard ANOVA (which ignores heteroscedasticity) versus gls (which accounts for heteroscedasticity).

Perhaps you could start your simulation exercise with a simple example with just 3 groups, where you keep the variability of the first two groups the same but change the variability of the third group by a factor f where f becomes increasingly large. This would allow you to see if and when that third group begins to dominate the results. (For simplicity, the differences in mean outcome values between each of the three groups could be kept the same, though you could look to see how the magnitude of the common difference plays with the magnitude of the variability in the third group.)

Well, for non-normal heteroskedastic data, in the worst case, you could have no meaning at all. Consider variables drawn from $$\frac{1}{2\pi}\frac{\sigma}{\left[\left(r_1-\mu_1\right)^2+(r_2-\mu_2)^2+\sigma^2\right]^{\frac{3}{2}}},$$ which you would get if you were drawing returns from two equity securities, then ANOVA would produce an entirely random result uncorrelated with reality. It would have a power of zero regardless of sample size.

Not the answer you're looking for? Browse other questions tagged anova heteroscedasticity assumptions or ask your own question.

1
What are the important conditions in ANOVA fixed effects?
23
Practically speaking, how do people handle ANOVA when the data doesn't quite meet assumptions?
4
2x2 ANOVA - assess violations of homoscedasticity & normality
5
Difference in means statistical test for non-normal, heteroscedastic data?
2
How is homogeneity of variances in residuals a requirement for ANOVA, when ANOVA is a test that involves analysis of variance?
2
Assumption of homoscedasticity/equal variance violated in a 2-way ANOVA
0
What is the difference between the measurement, and within subject factor fields is in SPSS (two-way repeated measures ANOVA)?
0
What to do when assumptions of both ANOVA and Kruskal-Wallis are violated?