How could I extract the distribution of one RV when given a set of sums of two RVs?

I'm sitting on a rather complicated task and I'm not sure which method to use here.

For a university class, we are consulting a psychologist who has shown people images like this: 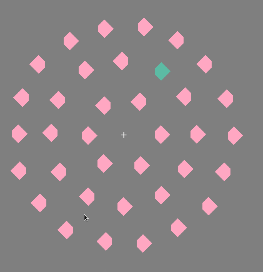 The task was to

But we are actually interested in only the selection time, part a) of the above list. This is why we additionally performed the following experiment: Before showing people the picture, we let a little square (called a 'cue') flash up in the spot where the target diamond will appear. The person will know at what location the target diamond appears. By this we hoped to eliminate the selection time, thus only measuring part b), the discrimination time. But note that we are still interested in selection time, not discrimination time.

So our data set consists of 16 persons, with reaction times of around 360 shown pictures per person. About half of them were presented without the little flashing 'cue' square (which means the total reaction time includes the selection time), and the other half had the flashing square (measuring only discrimination time).

Our primary interest is the distribution of the selection times.

We heard a few keywords for which method we could use to extract that selection time. One was "deconvolution of distributions", then we heard about a "fast Fourier transform", which we're not sure how to use yet. Simple subtraction of reaction times without cue from the reaction times with cue might work, but we don't know how to pair those reaction times.

I know this sounds confusing, but I hope I could make our task somewhat clear. If something is not explained properly, I can of course clarify.

If you had any suggestions on which method might be appropriate here, we would be most grateful.

So the question becomes if you know $H$ and $f$ can you deconvolve to get $g$?

Here is a wikipedia article that describes deconvolution and gives you an idea of how the FFT enters into it: http://en.wikipedia.org/wiki/Deconvolution

5
How to test whether button pressing behaviour is random or is in response to a stimulus?
1
The correct probability distribution / way to identify large deviations in a set of daily changes to portfolio value
1
Normalizing Data in Multiple Categories
3
From unevenly spaced values, a normal distribution that sums to the mean
1
Calculating variance of distribution when given various sums of that distribution
1
Optimal combination of biased samplers