I am trying to analyze whether different intervention groups scored differently in questionnaire measures before and after an intervention.

I also want to include age and gender as covariates in order to control for them. Gender and age have both been included as a numeric variable type within SPSS as when i tried to code gender as a string variable type (e.g. M=1, F=2) it would not let me analyse the data.

I try to use a general linear model --> Repeated measures and then classify my within subjects factor as the scores on the two questionnaires at 2 levels. The intervention is put in as the Between-subjects factor and the gender and age are included as covariates.

The problems I am having:

Any help would be appreciated.

Here is a simulated dataset in SPSS. The data have to be in the wide-format, as shown here: 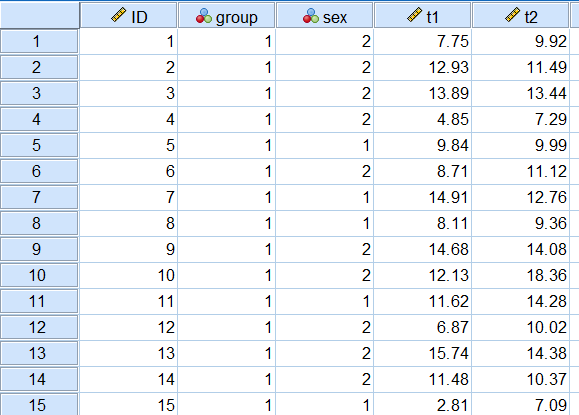 ID is an identifier for each subject, group indicates the group, sex indicates the gender and t1 and t2 are the measurements at baseline and follow-up.

We can visualize the data using boxplots: 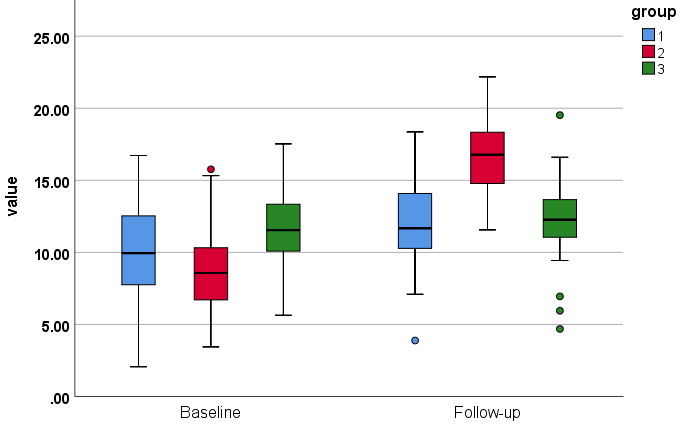 The analysis itself is simple. Using the menu, go Analyze $\rightarrow$ General Linear Model $\rightarrow$ Univariate. I find it much easier to use the syntax directly. For this example, the syntax could look like this:

The results are as follows: 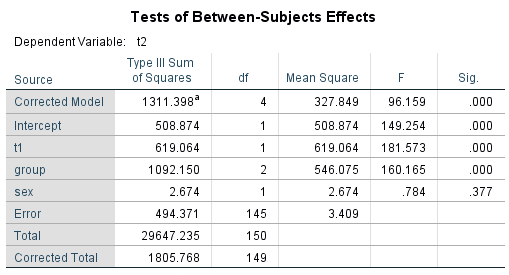 We can see that there is evidence that the baseline value t1 has an influence on the follow-up measurements (this is often not of interest). The line called group provides evidence that the change from baseline to follow-up differ between the groups. On the other hand, there is little evidence for a difference among genders with respect to change.

Next, we can compare the groups pairwise:

These comparisons were corrected using Bonferroni adjustments. We can see that there is evidence that groups 1 vs. 2 and 2 vs. 3 differ with respect to their changes from baseline to follow up. Specifically, group 2 changed 5.65 points more on average compared to group 1. Group 3 changed 6.5 points less compared to group 2. (Note that these comparisons are calculated at the mean of the baseline measurements.)

This analysis can be expanded by including interaction terms or adding more covariates. One could, for example, include an interaction term of sex with group, allowing to test whether the change in each group depends on the gender.

Don't forget to perform model diagnostics as applicable to all (multiple) linear regression models: The syntax above saves the predicted values and the standardized residuals. These can subsequently be used to create a scatterplot of predicted values vs. residuals (Tukey-Anscombe plot) or a Q-Q-plot of the residuals.

Not the answer you're looking for? Browse other questions tagged anova generalized-linear-model repeated-measures spss psychology or ask your own question.

2
How to analyse multiple between subjects factors in a mixed ANOVA in SPSS?
2
How to interpret an interaction effect in SPSS output for a repeated measures anova with between and within group factors?
2
Post-hoc for 2x2 mixed design ANOVA using SPSS
1
Repeated measures ANOVA and post-hoc tests in SPSS
1
SPSS - 2 factor mixed model ANOVA with missing values?
3
When to use repeated measures versus ANOVA on differences