Can someone please explain the target update for deep Q learning?

The algorithm for deep Q learning is taken from here https://ai.intel.com/demystifying-deep-reinforcement-learning/ 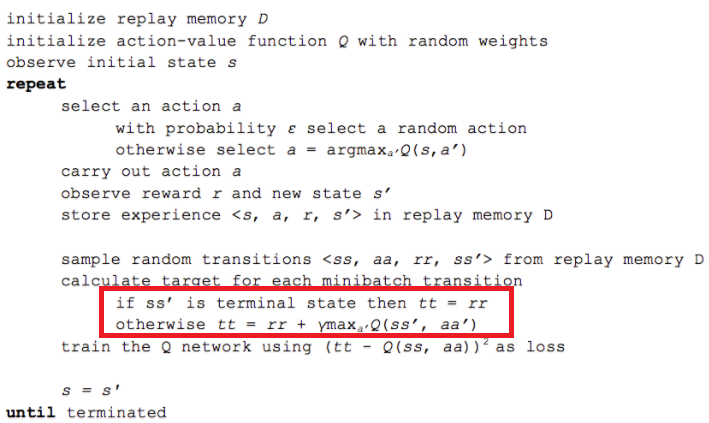 I am confused about how the target is calculated, and why it is so.

To train the network, first, we perform an action and get a new state $s^\prime$

We store the state in the replay memory $D$

Now we sample a number of random transitions from the replay memory.

We then calculate (more precisely, update) the target for each minibatch transition. I understand that we need to update our target so it becomes closer to the optimal expected discounted reward.

But I don't understand why we are doing it with random batches.

To put my concern in a even more simplified form:

How does the new information help with the prediction update?

From another perspective, in the supervised case, we gain improvement because the targets is labelled (i.e., we know that the image is a dog a-priori), therefore we are matching input to target and training our network to do it better and better. But we don't have the optimal target in this case...so I can't see improvement

This is because we're training a Neural Network. In "regular" Reinforcement Learning (tabular for example), your suggestion is indeed much more common. The main problem with the idea of always updating on the latest sample of experience is that there will be an extremely large amount of correlation between our most recent samples of experience. If every state transition is only a small step in a large environment, we'll have lots of consecutive learning steps all for very similar states; they're highly correlated with respect to time (consecutive state transitions), and also likely to be highly correlated with respect to the states themselves if every individual action only creates a relatively small change in the state.

The problem with a bunch of consecutive, highly correlated updates for similar states is that training a Neural Network with that kind of input is problematic; a Neural Network is prone to "forgetting" things it has learned previously for certain inputs if you don't repeatedly keep showing it those kinds of inputs. So, if we take 100 small steps that are all kind of similar in terms of time and state representation, and consecutively train our network on all of those without also showing a bunch of more diverse, older inputs in between, it can easily forget everything it has learned about those older inputs and focus only on performing well for these few recent inputs.

By randomly sampling the inputs we present to our network from a large experience replay buffer, which also contains significantly older experiences, we can ensure that we have a diverse set of inputs to learn from, and avoid forgetting about things we learned before.

The same answer as for your first question holds here. Note that the new experience is also stored in the replay buffer, so we do expect to eventually learn something from this new experience too. We just might not learn from it right now, might learn instead from some other older experiences (from which we maybe also did not learn anything yet). It's all just about diversifying our inputs again, making sure we see a little bit of everything.

Using a smaller batch size essentially increases the variance of your gradient estimates. This can slow down learning a bit, because your gradient estimates (and therefore directions in which you're performing updates) can bounce all over the place a bit (high variance). Sometimes you'll perform an update in one direction, and perform another update in the opposite direction afterwards. This obviously slows you down a bit. However, it also adds a bit of additional "exploration", you get to investigate the "landscape" of your objective function a bit more, you're less likely to tunnel-vision on a local minimum of your loss function and overlook a better minimum somewhere else.

So, there's really nothing definitive to say about which one is better, smaller or larger batch size, it's really just a hyperparameter that must be tuned. There are advantages and disadvantages to either. Intuitively, especially early on in training a smaller batch size (more variance) seems helpful to me: the gradient estimates of a larger batch size may be more stable, more "precise", but early on in training it is based on highly flawed data anyway; data generated by close to a random agent early on in training. Do you really immediately want to tunnel-vision on a local optimum based on such flawed data? Probably not, bouncing around a bit with higher variance seems helpful. There certainly has been research using larger batch sizes though, with hardware that supports it. See, for example, this paper.

3
Step-by-step explanation of Experience Replay in DQN
13
Why experience replay requires off-policy algorithm?
1
Neural Q Learning workflow and behaviour
1
How can Deep Q Learning be applied to scenarios with rewards only received in a final step?
3
How should an agent with action size more than one learn about a good state?
0
How to initialize and update Q network weights in DQN with delayed/sparse reward
0
DQN - breaking correlation between consecutive samples and random sampling
1
Improve stability for value-based Deep Reinforcement Learning