I asked the following question and (don't think) really received a thorough answer. I qualify my impression about the suitability of the answer, because perhaps I am lacking pre-requisite knowledge.

(I know that the X design matrix will not be invertible when there are "dummy variables" and more than 2 levels of a given nominal predictors - hence I mention only numeric covariates here). 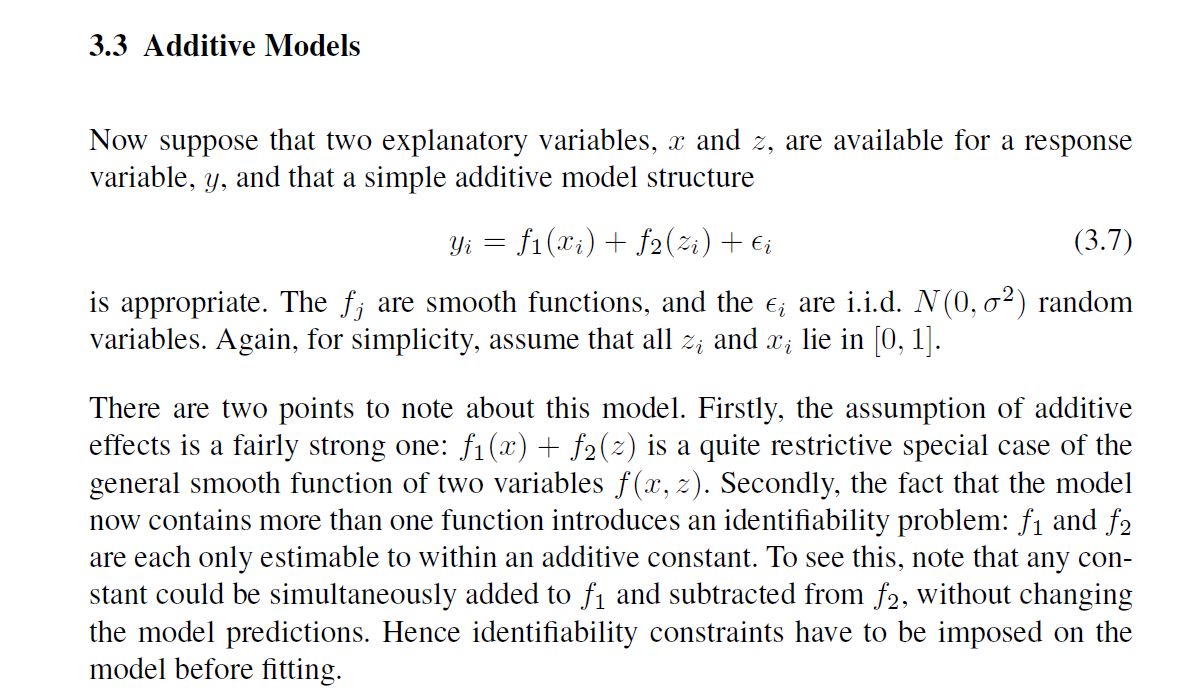 II. Are these constraints required when considering a generalized linear | additive model?

Identifiability constraints and centring constraints are two related things. A little further on in Wood (2006), Simon goes on to mention that the $f_j(x)$, $j = {1, 2}$, can be represented as a penalised regression spline basis. (All of the models in mgcv's gam() are fitted using penalised regression.) Simon then shows the two equations for $f_j(x)$ using a spline basis from section 3.2.1 are

In order for us to learn the true values of $\delta_j$ and $\gamma_j$ the model needs to be identifiable. Simon's comment in the text you quote says that the $f_j$ are not fully identifiable; we can only estimate their true values up to the additive constant he mentions. If we can't identify the true values of the smooths then they aren't much use for telling us something about our data and the population from which the data are drawn. It would be like saying the estimated values of the $b_j$ in your linear model could take any value; how would you interpret the estimated coefficients if they could take any value? You couldn't.

Elsewhere [pdf] Simon describes the identifiability constraints more generally as "that each smooth should sum to zero over its covariate values" (page 8 in the preprint). In my head this is a centring constraint as the smooths are centred about zero. And this makes the link nicely to the centring constraints in by terms.

As for the centring constraints in by smooths, each separate smoother is constrained so that it sums to zero over the values of the covariate; this allows the smooths to be identified as per the above. As the smooths each sum to zero, the smoothers can only represent variation in $y$ about a common mean. In other words, the $f_{g}$ describes how the response varies as a function of $x$ for each group $g$ about a common mean value. As such a model including $f_{g}(x)$ (a by smooth) allows for different shaped relationships between $x$ and the response $y$, but does not include any systematic difference in the mean of $y$ in the different $g$ groups.

That is the point I was trying to make in the Q&A you linked to; the reason you need to include the factor by variable as a parametric term in the model as well as the by smoother is to allow the model to capture any differences in the means of $y$ over the various groups. That variance would not be accounted for if you just include the by smoother.