What constitutes a large KL divergence?

I have 2 gamma distributions

Where we are defining our gamma distribution probability density function for a random variable $X \sim Ga(a,b)$ to be

As commented by W. Huber, this is a fairly interesting question, even though I doubt there is a clear absolute answer. To quote a few generic references,

"...it is the amount of information lost when Q is used to approximate P." Wikipedia

But coding is a fairly specialised notion (in my opinion) while information is pretty vague (one could argue it is actually defined by the Kulback-Leibler distance). And there is no absolute scale since the distance most often ranges from 0 to $\infty$ (contrary to what the Wikipedia page may suggest in its first paragraph). Thus the scaling of calibration of a Kullback-Leibler distance will depend on the problem at hand and the reason why one measures such a distance. 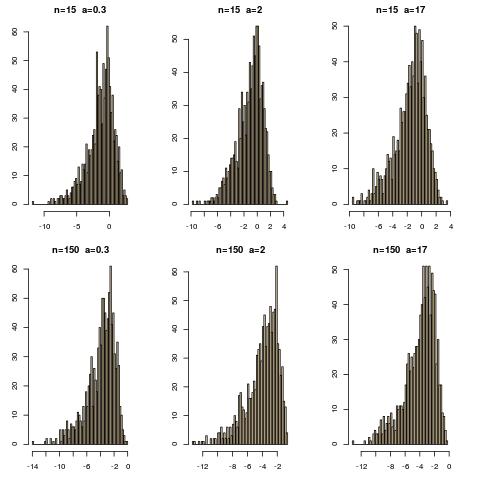 Here is the core of the R code (using W. Huber's KL.gamma) in case this is unclear:

The interpretation of this small experiment is that, when considering a sample of size $n=15$, a Kullback-Leibler divergence around $1$ is not significant in the sense that the same "true" parameters produce samples that lead to estimated distributions at a distance of around $1$. When moving to a sample of size $n=150$, this becomes a highly significant distance. (Note that this experiment is only trying to make a point of the lack of absolute "large" or "small" Kullback-Leibler divergence, not to turn this assessment of scale into a test or something like that!)

Not the answer you're looking for? Browse other questions tagged r distributions gamma-distribution kullback-leibler or ask your own question.