Bayesian prior via cross validation

I have a particular problem where I am using Bayesian techniques to estimate parameters of a distribution of a random variable.

I would like to use an external source of data to determine an appropriate prior distribution for the analysis (which will then be updated with internal data). Let's denote this external data as

Now, ideally I would like to use this data to determine the prior distribution of an underlying parameter vector

My current approach is:

The above process provides $M$ estimates of $\boldsymbol{\Theta}$ and provides a prior distribution for our analysis.

I feel this a reasonable approach as it should be quite robust as we have randomly sampled from our original data each time we estimate. Obviously, the analysis will depend on the size of the subsample. I view this as some sort of cross-validation implicit in the estimation.

Is the above a reasonable approach to determining a prior distribution from an external source of data?

Additional Essentially, I want the external data to construct prior distributions for each of the parameters. The external data contains information that the internal data is lacking and therefore would like the priors to be a starting point for the Bayesian analysis which the internal estimates will be based on.

Just for clarification, the model had been set up as follows: 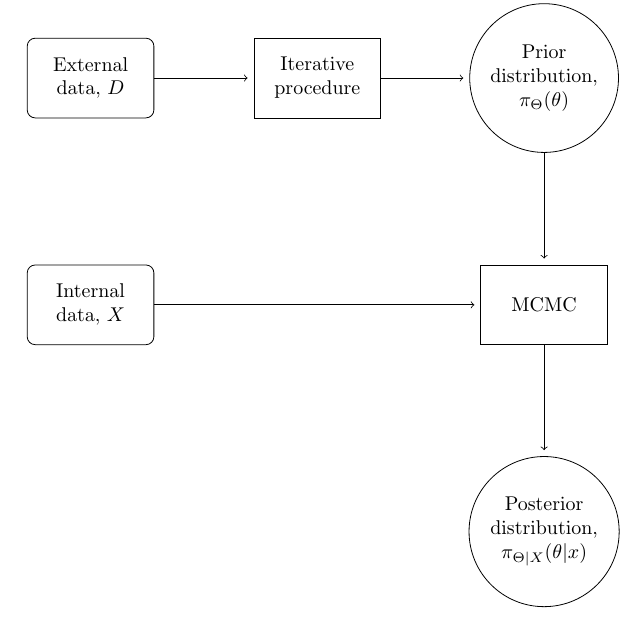 where the iterative procedure is given below:

Yes, it is an excellent method. Usually, priors are built from less. That is a very defensible solution to constructing a prior density.

There is an article by Jaynes at http://bayes.wustl.edu/etj/articles/highly.informative.priors.pdf on highly informative priors.

EDIT How interesting, I am working on a similar problem assuming LGD is loss given default.

So, since I do not know your methodology, but I presume it is some form of regression, I would recommend looking at the Bolstad method of mixing prior results from the literature with a flat prior. These leaves the center of location intact but spreads out the uncertainty.

To provide an example, let us imagine you know that $\hat{\beta}_x=1.23$ in the literature with a variance of $.000001$ so it is estimated to a precision less than your least significant digit. You could construct a prior distribution around the literature's center of location but with a high variance. How high is high would, of course, depend upon the scaling of your literature, but you want it to be high enough that you have captured all reasonable estimates of the parameter in the dense region of your prior.

This is the difficulty of Bayesian methods, they depend on judgment to some extent. How the joint distribution of parameters works will also be a judgment call. While you could take the naive Bayes approach of no covariance if there is a published covariance matrix then it should be the starting point of your search.

What you are wanting your Bayesian method to do is guide your estimator into the region that is most likely the true region. You should add variance to your estimators to account for the cultural and legal differences surrounding losses.

I would love to give you a clear answer that every editor in the journals would take, but the most you can do is hunt the statistical literature for "informative prior" and "highly informative prior." There would also be content on robust methods and mixture priors.

Gelman's section on the use of historical data would also be of use. He anticipates a body of literature from which to construct the prior. This is problematic since no one is actually performing the same exact research in question.

One approach that could be taken is to grab Cox's axiomatic approach where probability is grounded in logic. Hence, you need to construct a logical framework for the construction of the prior. Hence your real job is disclosure and reasonableness and not a precise algebraic formulation.

to update your knowledge given $X_2$ sample, you take

what would be equivalent to updating all at once

To give an example, consider a beta-binomial model, where the posterior distribution is

This directly translates to your case, where you have the "external" $X_1,\dots,X_n$ samples and want to use them to generate posterior for the "internal" sample $X_{n+1}$. Basically, this is the general idea behind Bayesian approach, where you can use your initial, or previous, knowledge and include it into your model as a prior, that is updated given new data.

What follows, is that

On another hand, if what you are asking is if using frequentist approach on the external data, to estimate the parameters for the priors, is a valid way to go, then the answer is still: yes, we often use external data, or previous results to create informative priors. However a Bayesian would still argue, that there is no reason for using frequentist approach in here. You can go all the way using Bayesian approach: starting with some prior, updating it using the external data, then using the posterior as a prior for a model using the "internal" data.

This thread is somewhat old, but this is a problem that I have been giving some thought to and wanted to suggest an approach.

You then proceed in the usual Bayesian way, updating the prior based on the internal data.

7
Can "cross-validation" be used to choose a prior?
2
How to define prior for beta-binomial A/B test
1
Type checking the Bayes formula

3
Is this prior distribution exchangeable?
4
How detailed should a data-driven Bayesian prior be?
4
Use of the Jeffreys prior in multidimensional models
2
Bayesian prior choice for multivariate Gaussian distribution
2
Combining bootstrap and maximum a posteriori estimation
2
How to set prior for Bayesian analysis