How to measure similarity/agreement between two temperature time series? [closed]

I am developing an application to compare temperatures from two locations, in the same span of time.

For example, temperature is measured every hour for three months straight in two different cities.

What would be a good way to compare these two data sets, and to come up with a agreement measure? What I am asking for is some measure of how identical or different the temperatures are. For example, if at 11 o'clock in a certain day in Oslo it is 3 degrees and in Athens it's 26 degrees, they would be markedly different, while if the temperatures were 23 and 21 degrees, respectively, we would consider them to be closer to the same measurement for these two cities. What I desire is to compare the lists of temperatures to make a combined report of how these temperatures agree/disagree overall.

I did not at first see the OP edit while I was answering. There are no really good answers to the question. What there is is a simplest answer to the question; to look up or calculate directly the mean temperatures in both locations, and then subtract them to find an expected difference in temperature at any particular time on any particular day. Mean temperatures require approximately 10 years of data to establish that mean, and or a time series like ARIMA. Three months of data from a single year would not be as useful. Next most useful would be regression, next most useful would be correlation. Agreement would not be a very useful measure because it is not information rich enough to explain how the temperatures covary. Details follow.

I found daily average temperatures compiled during 2010 for Augusta, Maine and Miami, Florida. Here is a chart: 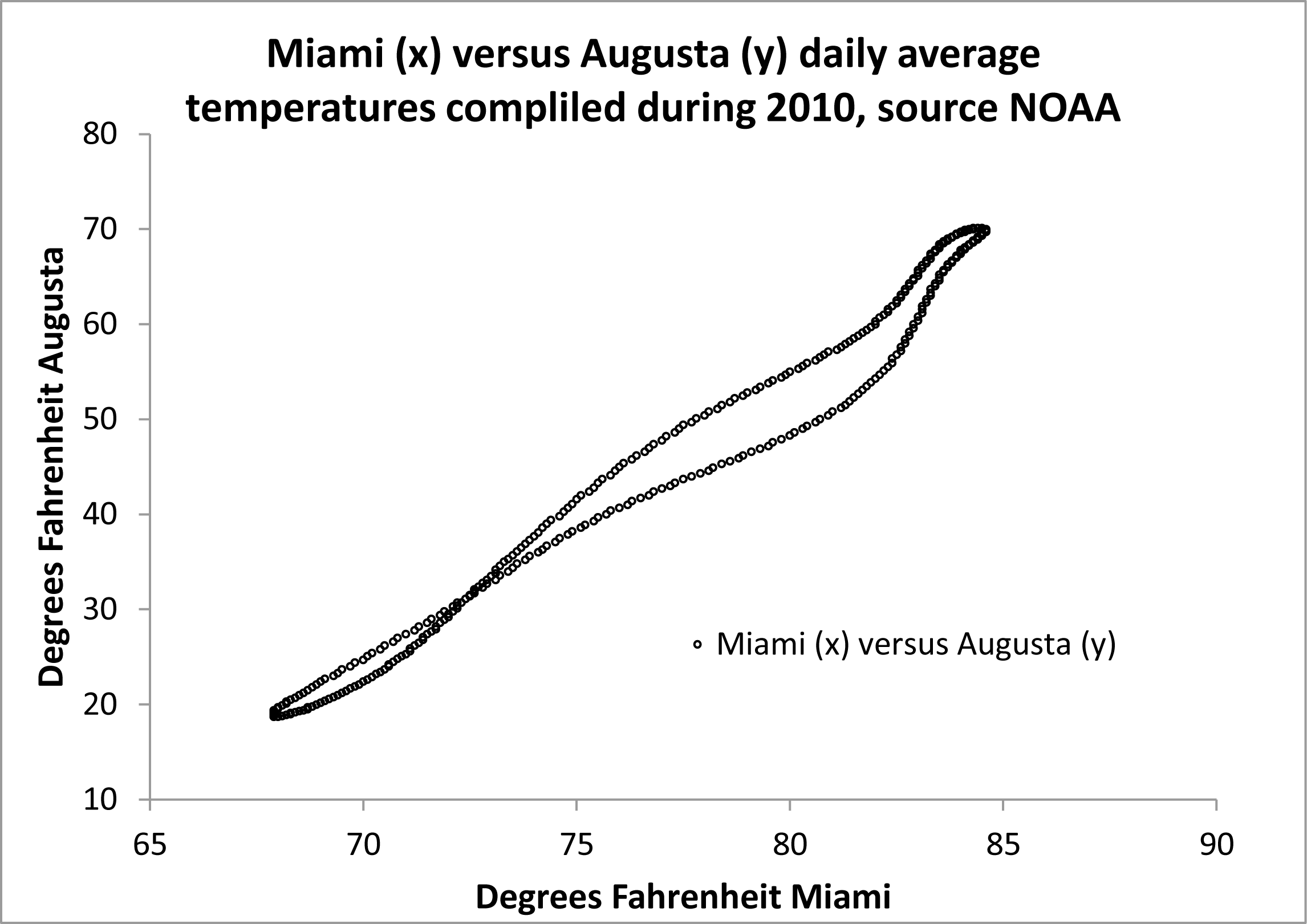 The correlation is $r=0.990128135$ and the coefficient of determination is $r^2=0.980353723$. The 2261 km distance between those cities is similar to the 2607 km Athens to Oslo distance. Like Athens and Oslo, Miami and Augusta are in the same time zones, meaning that the daily temperature highs and lows will be correlated positively so that if hourly data were readily available, that would correlate. Now if unique measurements rather than averages were included, that may lower the coefficient of determination, nonetheless the correlations are higher than even I suspected. Note on the chart that there is a doubled hysteresis loop presumably largely due to the difference in timing of temperature modification by the proximity of the Labrador current in Maine, and the Gulf stream current for Miami.

One can convert between Miami and Augusta temperatures using bivariate regression, i.e., using Passing-Bablok invertible (unlike OLS) regression $F(Miami)= 0.3203 F(Augusta) + 62.38$. Moreover, the chart shows a quite smooth progression of temperatures along a curvilinear closed path in a one year loop. Now on any particular day of the year, or any particular time of day, there is a difference in temperature between the two sites that is on average fairly stable. If you want to know what it is, calculate or look up that difference. For example, for @gung, here are those average annual temperature differences between the two sites in degrees F compiled on days 0-365 of 2010. 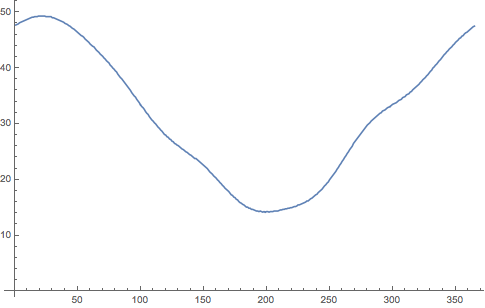 If you want to measure agreement then Lin's concordance correlation coefficient would be one alternative, but not a very useful one (see below). This is similar to an intraclass correlation and measures how distant an agreement is from the identity line $y=x$. Agreement is not the right question to ask of a time series model, like an

Let us compare those results with Lin's concordance:

which is $r_c=0.148498 $ for the Augusta to Miami value, and $r_c=-0.38624$ for the Oslo to Melbourne concordance. So in the first case, the concordance is weak, and in the second case there is a slightly stronger disagreement. This doesn't go very far in explaining the differences in temperature.

Not the answer you're looking for? Browse other questions tagged time-series paired-data climate or ask your own question.

8
How to model time-series temperature data at multiple sites as a function of data at one site?
4
Multiple simulations of a system under different conditions - paired data?
1
Comparing the performance of two teams measuring many variables once
4
Measures to compute the similarity between two time series whose amplitude is periodic ignoring any phase differences
1
Temperature timeseries agreement significance test