Robust estimator of parameters of a mixture distribution

I could for instance try and find three modes in the histogram, then classify the values by assigning them to the closest mode and estimate the class averages. I also assume that the median would be a good estimator of $a+b$. (And the distribution of $|v-\overline{a+b}|$ would be bimodal.)

Can you advise an approach for $b$ ?

Following the comments by @whuber, I can recast the question as estimating the means of a three membered Gaussian mixture, knowing that these means are equidistant, the variances are equal and there is a good separation between the members (but a few outliers).

A cluster analysis, followed by finding the medians of the clusters, would likely work well. However, there are demonstrably robust, effective, simple procedures that could be recommended because (1) they are relatively easy to study and analyze; (2) they capitalize on the assumed arithmetic progression and the assumption that about half the data are near the middle mode; and (3) they can be tuned to achieve a desired amount of robustness (within limits).

One procedure begins by estimating $a+b$ as the median of the data. You then expect the absolute residuals to be clustered, in approximately equal proportions, near $0$ and $b$. By specifying a suitable quantile $q$ between $0.5$ and $1.0$ you can obtain a preliminary estimate $b^{*}$ of $b$: for instance, the $0.75$ quantile should be a good estimate. With this preliminary estimate in hand, complete a simple cluster analysis by partitioning the absolute residuals into those less than $b^{*}$ and those greater than $b^{*}$. The median of the latter group is a robust estimate of $b.$ The estimate of $a$ is obtained by subtracting the estimate of $b$ from the estimate of $a+b.$ (See the code at the end of this post.)

There's a trade-off: if $q$ isn't high enough, there may be an appreciable chance that this quantile will lie in the cluster near $0$ and thereby grossly underestimate $b$. If $q$ is too high, the quantile will be sensitive to outliers and perhaps grossly overestimate $b.$ Adjusting $q$ to achieve a desired balance between these behaviors allows you to tune the procedure.

I performed a simulation with $n=50$ and $q=0.875,$ using perturbations equal to $0.1b$ times a Cauchy distribution. It's a fairly severe test because this distribution produces outliers at a great rate: it has about a $1$ in $8$ chance of changing a value by more than $b/2,$ thereby moving it closer to another mode (or far from all the modes).

Here are histograms of the first $20$ iterations. I fixed $a=b=1$ and have marked the locations $a=1,a+b=2,a+2b=3$ with vertical black dashes. The estimates are shown with red lines. They are in good agreement with the true values for these iterations. (The choices of $a$ and $b$ don't matter: all that's relevant is the dispersion of the random noise, expressed on a scale where $b$ is one unit.)

The outliers are evident in iterations 5, 12, and 14 because they are so extreme. You can also see plenty of data falling vaguely between two of the modes, making them difficult to classify.

The next figure is a scatterplot to show the relationship between actual values of the modes (that is, $1,2,3$) and the estimated values from all 2000 iterations. 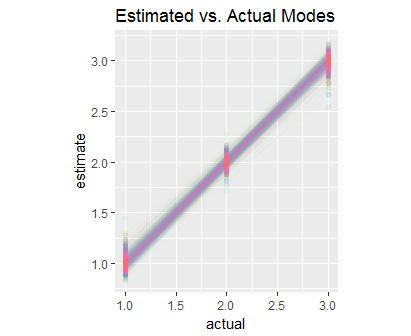 Finally, let's look at how the estimates of $a$ and $b$ are related, by drawing their scatterplot: 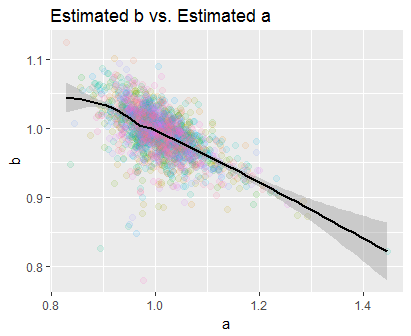 As you might expect, they are negatively correlated. (The curve is a local nonlinear smooth, so it's remarkable that it is nearly linear throughout the full range of estimates.) Because the cloud is concentrated at $(1,1)=(a,b),$ the estimates are unbiased. (Their averages in this simulation were $1.009$ and $0.993,$ respectively, with a correlation coefficient of $-60\%.$)

Finally, the R code to create these estimates is fast and simple. It returns estimates of all three modes. It is guaranteed that the middle estimate is exactly halfway between the two extreme estimates. (This differs from a general procedure to estimate the locations of a mixture of three components. It also differs insofar as it relies on the assumption that the weight of the middle component is one-half the total.)

That solution might not be the best if your groups do not possess similar variances, or huge variances so that they overlap a lot.

Not the answer you're looking for? Browse other questions tagged estimation robust or ask your own question.