X and Y are not correlated, but X is significant predictor of Y in multiple regression. What does it mean?

How should I interpret these findings? X predicts unique variance in Y, but since these are not correlated (Pearson), it is somehow difficult to interpret.

I know of opposite cases (i.e., two variables are correlated but regression is not significant) and those are relatively simpler to understand from a theoretical and statistical perspective. Note that some of the predictors are quite correlated (e.g., .70) but not to the extent that I would expect substantial multicollinearity. Maybe I am mistaken, though.

Causal theory offers another explanation for how two variables could be unconditionally independent yet conditionally dependent. I am not an expert on causal theory and am grateful for any criticism that will correct any misguidance below. 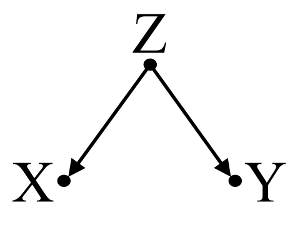 Second, consider an example of collider bias (also known as Berkson's bias or berksonian bias, of which selection bias is a special type): 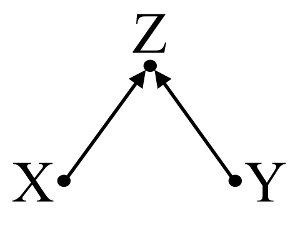 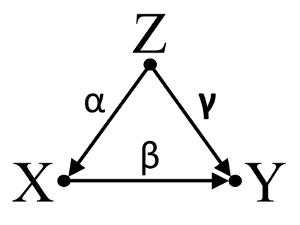 The results of your analysis are not compatible with the confounder example but are compatible with both the collider example and the incidental cancellation example. Thus, a potential explanation is that you have incorrectly conditioned on a collider variable in your multivariable regression and have induced an association between $X$ and $Y$ even though $X$ is not a cause of $Y$ and $Y$ is not a cause of $X$. Alternatively, you might have correctly conditioned on a confounder in your multivariable regression that was incidentally cancelling out the true effect of $X$ on $Y$ in your bivariable regression.

Contemplation of causal models does not excuse the investigator from addressing the statistical considerations discussed in other answers here. However, I feel that causal models can nevertheless provide a helpful framework when thinking of potential explanations for observed statistical dependence and independence in statistical models, especially when visualizing potential confounders and colliders.

Pearl, Judea. 1998. Why There Is No Statistical Test For Confounding, Why Many Think There Is, And Why They Are Almost Right.

I think @jthetzel's approach is the right one (+1). In order to interpret these results you will have to think about / have some theory of why the relationships manifest as they do. That is, you will need to think about the pattern of causal relationships that underlies your data. You need to recognize that, as @jthetzel points out, your results are consistent with several different data generating processes. I don't think that any amount of additional statistical tests on the same dataset will allow you to distinguish amongst those possibilities (although further experiments certainly could). So thinking hard about what's known about the topic is vital here.

I want to point out another possible underlying situation that could generate results like yours: Suppression. This is more difficult to illustrate using the arrow diagrams, but if I can augment them slightly, we could think of it like this: 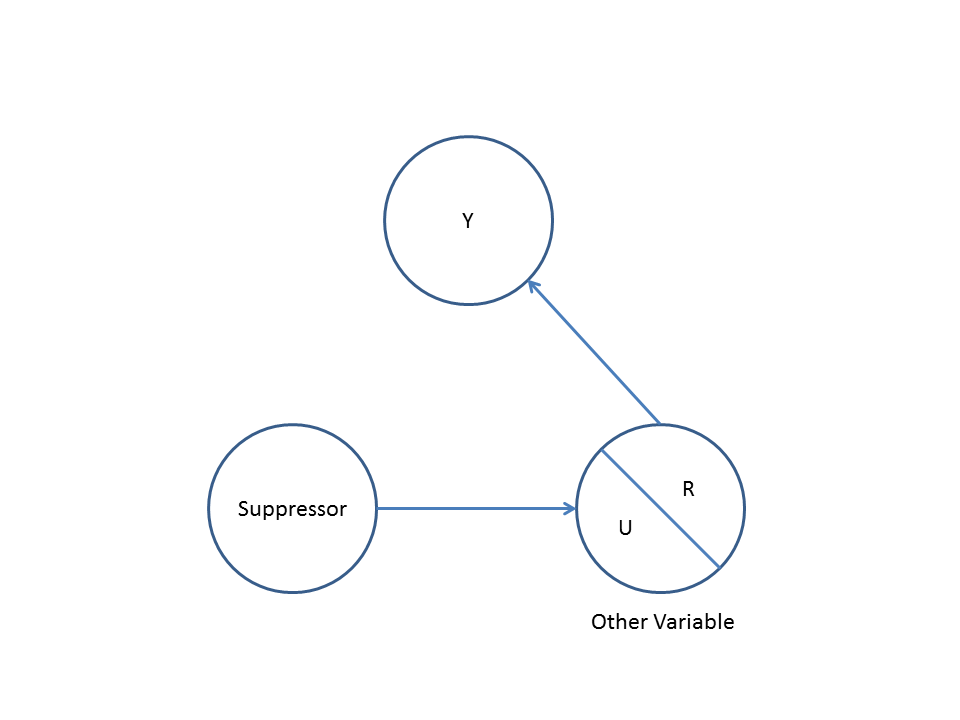 I don't know if you can read R code, but here's an example I worked up. (This particular example fits better with X playing the role of the $\text{Suppressor}$, but both are not 'significantly' correlated with $\text{Y}$; it should be possible to get the correlation between the $\text{Other Variable}$ and $\text{Y}$ close to 0 and match the other descriptives with just the right settings.)

My point here isn't that this situation is the one that underlies your data. I don't know if this is more or less likely than the options @jthetzel suggests. I only offer this as more food for thought. To interpret your current results, you need to think about these possibilities and decide what makes the most sense. To confirm your choice, careful experimentation will be needed.

Just some visualization that it is possible.

On picture (a) "normal" or "intuitive" regressional situation is shown. This pic is the same as for example found (and explained) here or here.

The variables are drawn as vectors. Angles between them (their cosines) are the variables' correlations. $Y'$ here designates the variable of predicted values (more often notated as $\hat Y$). Skew coordinate of its edge onto a predictor vector (skew projection, parallel to the other predictor) - notch $b$ - is proportional to the regression coefficient of that predictor.

On picture (b) shown is situation where predictor $X_1$ correlates with $Y$ positively, still it's regression coefficient is zero: the endpoint of the prediction $Y'$ projects at the origin of vector $X_1$. Note that this fact coincides with that $Y'$ and $X_2$ superimpose, which means that the predicted values absolutely correlate with that other predictor.

On picture (c) is the situation where $X_1$ does not correlate with $Y$ (their vectors are orthogonal), yet the regression coefficient of the predictor is not zero: it is negative (the projection falls behind $X_1$ vector).

Data and analysis approximately corresponding to pic (b):

Observe that $X_1$ in the last example served as suppressor. Its zero-order correlation with $Y$ is practically zero but its part correlation is much larger by magnitude, $-.224$. It strengthened to some extent the predictive force of $X_2$ (from $.419$, a would-be beta in simple regression with it, to beta $.538$ in the multiple regression).

I agree with the previous answer but hope I can contribute by giving more details.

But what happens if $Y$ is generated by other variables as well, thus the real model is something like:

Under this real model, it becomes obvious that estimating the first one (only with x) will yield a biased $\beta$ estimate as that model is omitting the $z_j$ regressors(this implies that $\rho$ is also biased !). So your results are in line with the fact that the omitted variables are relevant. To deal with this issue , theory on correlation analysis provides the partial correlation coefficient (I'm sure you will find references on this) which basically calculates $\rho_{xy|z}$ from the latter estimating equation that controls for $z_j$.

0
Will an OLS estimator for a regressor differ between a single linear regression and a multiple linear regression?
0
Two variables are correlated but regression is not significant?
75
How can adding a 2nd IV make the 1st IV significant?
84
How to visualize what canonical correlation analysis does (in comparison to what principal component analysis does)?
22
When A and B are positively related variables, can they have opposite effect on their outcome variable C?
53
Suppression effect in regression: definition and visual explanation/depiction
46
Multiple regression or partial correlation coefficient? And relations between the two
20
Confounder - definition
14
Positive correlation and negative regressor coefficient sign
12
Data space, variable space, observation space, model space (e.g. in linear regression)
See more linked questions