For 86 companies and for 103 days, I have collected (i) tweets (variable hbVol) about each company and (ii) pageviews for the corporate wikipedia page (wikiVol). The dependent variable is each company's stock trading volume (stockVol0). My data is structured as follows:

As I understood, this is called pooled cross-sectional time series data. I have taken the Log-value of all variables to smoothen the big differences between companies. A regression model with both independent variables on the dependent stockVolo returns:

Now, Durbin-Watson is at an accceptable 2,408. But obviously, R-squared is extremely high because of the lagged variable, see also the coefficients below:

Another method I read about when being confronted with autocorrelation, is autoregression with Prais-Winsten (or Cochrane-Orcutt) method. Once performing this the model reads: 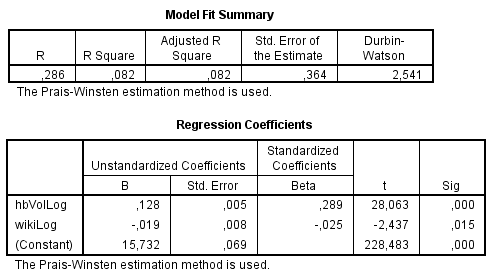 This is what I don't understand. Two different methods, and I get very different results. Other suggestions for analyzing this data include (i) not including a lagged variable but reformat the dependent variable by differencing (ii) perform AR(1) or ARIMA(1,0,0) models. I haven't calculated those because I am now lost on how to proceed because of the different results of the two tests I did perform.

What model should I use to perform a proper regression on my data? I'm very keen on understanding this, but have never had to analyze a timeseries dataset like this before.

For each of the 86 companies , identify an appropriate ARMAX model which should incorporate the effects ( both contemporaneous and lag ) of the two user-suggested predictor variables and any necessary ARIMA structure. Incorporate any needed ( and empirically identifiable ) structure reflecting unspecified deterministic effects via Intervention Detection. Use these empirically identified intervention variables to cleanse the output series and remodel using the cleansed series as an ARMAX model. Now review the results for each of these 86 case studies and conclude about a common model. Estimate the common model both locally ( i.e. for each of the 86 companies ) and then estimate it globally ( all using the cleansed output series). Form an F test according to Gregory Chow http://en.wikipedia.org/wiki/Chow_test to test the null hypothesis of a common set of parameters across the 86 groups. If you reject the hypothesis then carefully examine the individual results ( 86 ) and conclude about which companies DIFFER from which companies. We have recently added this functionality to a new release of AUTOBOX, a piece of software that I am involved with as a developer. We are currently researching a formal way to find out ala Scheffe which companies differ from the others.

AFTER RECEIPT OF DATA:

The complete data enter link description hereset can be found at , I selected the first 3 companies (AA,AAPL,ABT). I selected trading volume (column S) as the dependent and the two predictors tweet (Z) and wiki (V) per the OP's suggestion. This selection can be found at enter link description here. Simple plots of the three dependent series suggest anomalies 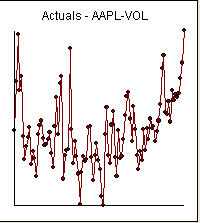 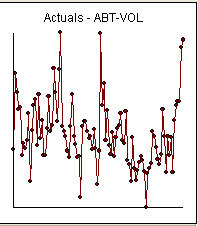 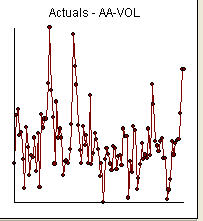 . Since anomalies are present the appropriate regression needs to take into account these effects. Following are the three models ( including any necessary lag structures in the two inputs ) and the appropriate ARIMA structure obtained from an automatic transfer function run using AUTOBOX ( a piece of software I have been developing for the last 42 years ) 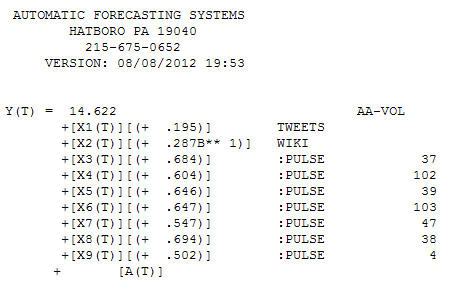 . We now take the three cleansed series returned from the modelling process and estimate a minimally sufficient common model which in this case would be a comtemporary and 1 lag PDL on tweets and a contemporary PDL on wiki with an ARIMA of (1,0,0)(0,0,0). Estimating this model locally and globally provides insight as to the commonality of coefficients . 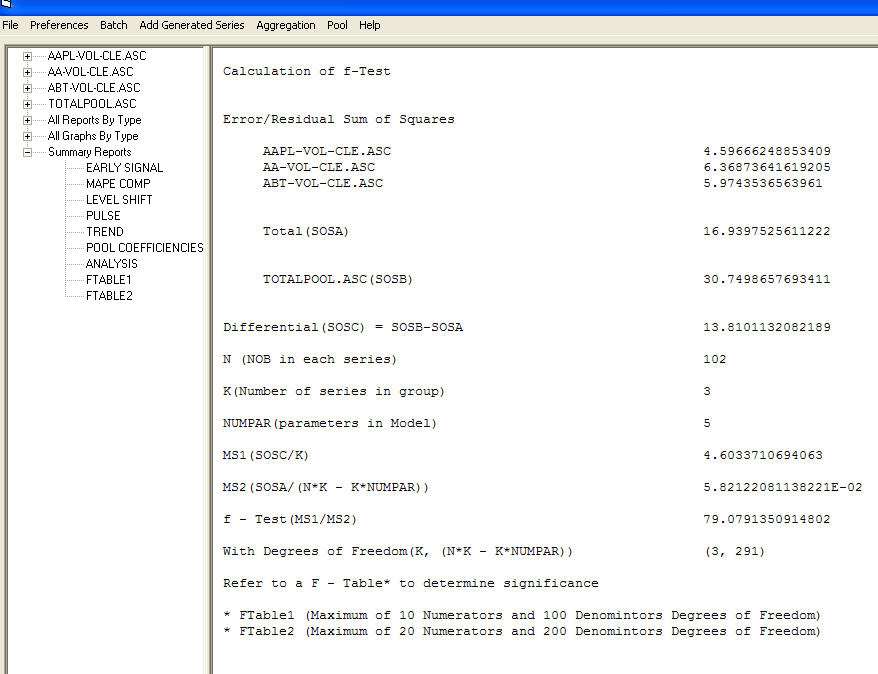 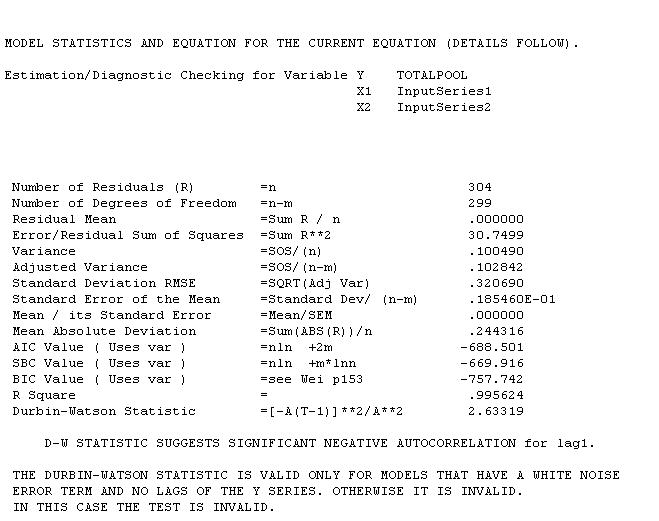 . The test for commonality is easily rejected with an F value of 79 with 3,291 df. Note that the DW statistic is 2.63 from the composite analysis. The summary of coefffici

ents is presented here. The OP poster reflected that the only software he has access to is insufficient to be able to answer this thorny research question.

There are a few things that I would do differently.

First, because each stock has a different overall level, you should include a set of ticker fixed effects, which is a set of dummy variables for whether a particular observation belongs to a particular ticker.

Second, stock prices are (almost?) always assumed to have a unit root. This would mean that the coefficient on your lagged variable would be 1. It is already pretty close (0.876); without fixed effects we can't be sure (because there could be bias), but it is pretty suggestive of a unit root.

For proper inference, you must look at the change in stock prices or the change in the log of the stock price (the latter is roughly equal to the % change or the return and is what is typically used). Otherwise you can get spurious results. As an added bonus, this differencing actually removes the need for ticker fixed effects.

Third, your standard errors are likely too small. You should employ standard errors that are clustered at the ticker level. This helps account for remaining serial correlation in the error terms.

These issues should be discussed in any reference to panel data, the usual moniker for data of the type that you are using. Wooldridge's Introductory Econometrics textbook for undergrads or Econometric Analysis of Cross Section and Panel Data for graduate students are common references.

In some ways the models seem to agree quite a bit. The standard error of the estimates and the Durbin-Watson statistic are very similar between the two models. Also the constant term and the regressors hbVolLog and wikiLog are significant in both models. The main difference seems to be that the first model includes the lagged value of the dependent variable and that seems to account for the large increase in R square. So I see nothing strange about the results. it just points to the strength of the lagged variable in predicting StockVol0. What does puzzle me is why the adjusted R square is the same as the unadjusted rather than being somewhat lower.

There are several possibilities in this problem, and really the best discussion I can cite is The Theory and Practice of Econometrics, 2nd edition, George Judege, W.E. Griffiths, R. Carter Hill, Helmut Lutkepohl, and Tsoung-Chao Lee, Wiley Series in Probability and Mathematical Statistics 1985, Chapter 13, Inference in Models That Combine Time Series and Cross-Sectional Data. Sounds dated, but I have been doing research with ridge regression that dips back into this resource. This was a big, very comprehensive book. Sorry I don't have more time to specifically analyse this, but I may do a post on this type of problem in my blog www.businessforecastblog.com

Not the answer you're looking for? Browse other questions tagged time-series spss autocorrelation panel-data cross-section or ask your own question.

0
Could somebody explain to me what this ARIMA model output says?
2
How to perform a basic forecasting model from pooled cross-sectional timeseries data in SPSS?

5
Autocorrelation in panel data
3
What to do with very low Durbin-Watson?
2
How to perform a basic forecasting model from pooled cross-sectional timeseries data in SPSS?
1
Time series: correcting the standard errors for autocorrelation
3
Breusch–Godfrey test under heteroskedasticity
2
How to remove cyclical trend in residuals for time series regression?