Here are some statements that I believe are true:

Statements (2) and (3) together make me think that perhaps $\hat{\boldsymbol\beta}_\lambda^*$ also converges to the appropriately normalized $\mathbf X^\top \mathbf y$, but I am not sure if this is correct and I have not managed to convince myself either way.

The estimator described in the question is the Lagrange multiplier equivalent of the following optimization problem:

which can be viewed, geometrically, as finding the smallest ellipsoid $f(\beta)=\text{RSS }$ that touches the intersection of the sphere $g(\beta) = t$ and the ellipsoid $h(\beta)=1$

In terms of a geometrical view this changes the old view (for standard ridge regression) of the point where a spheroid (errors) and sphere ($\|\beta\|^2=t$) touch. Into a new view where we look for the point where the spheroid (errors) touches a curve (norm of beta constrained by $\|X\beta\|^2=1$). The one sphere (blue in the left image) changes into a lower dimension figure due to the intersection with the $\|X\beta\|=1$ constraint.

In the two dimensional case this is simple to view. 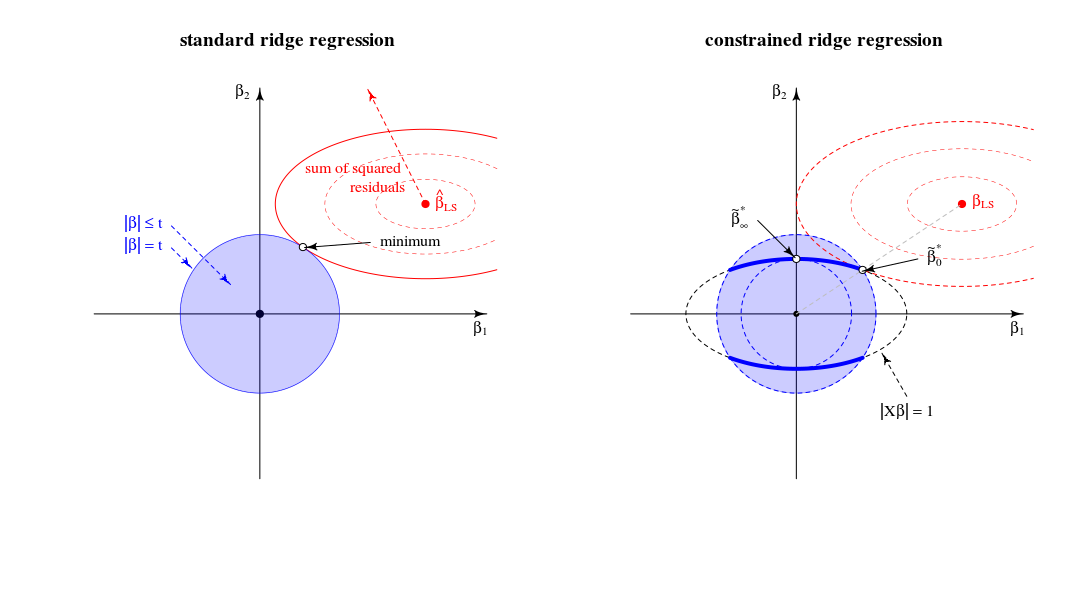 When we tune the parameter $t$ then we change the relative length of the blue/red spheres or the relative sizes of $f(\beta)$ and $g(\beta)$ (In the theory of Lagrangian multipliers there is probably a neat way to formally and exactly describe that this means that for each $t$ as function of $\lambda$, or reversed, is a monotonous function. But I imagine that you can see intuitively that the sum of squared residuals only increases when we decrease $||\beta||$.)

In this 2-d view the edges of the intersection of the sphere $\lVert \beta \rVert^2 =t$ and spheroid $\lVert \beta X \rVert^2 = 1$ are points. In multiple dimensions these will be curves

(I imagined first that these curves would be ellipses but they are more complicated. You could imagine the ellipsoid $\lVert X \beta \rVert^2 = 1$ being intersected by the ball $\lVert \beta \rVert^2 \leq t$ as some sort of ellipsoid frustum but with edges that are not a simple ellipses)

##Regarding the limit $\lambda \to \infty$

At first (previous edits) I wrote that there will be some limiting $\lambda_{lim}$ above which all the solutions are the same (and they reside in the point $\beta^*_\infty$). But this is not the case

Consider the optimization as a LARS algorithm or gradient descent. If for any point $\beta$ there is a direction in which we can change the $\beta$ such that the penalty term $|\beta|^2$ increases less than the SSR term $|y-X\beta|^2$ decreases then you are not in a minimum.

##Further notes regarding the limit $\lambda \to \infty$

This is an algebraic counterpart to @Martijn's beautiful geometric answer.

Now let us consider the solution for any value of $\lambda$ that I referred to in point #2 of my question. Adding to the loss function the Lagrange multiplier $\mu(\|\mathbf X\boldsymbol\beta\|^2-1)$ and differentiating, we obtain

How does this solution behave when $\lambda$ grows from zero to infinity?

Overall, we see that this constrained minimization problem encompasses unit-variance versions of OLS, RR, PLS, and PCA on the following spectrum:

Despite having quite a bit of experience with RR/PLS/PCA/etc, I have to admit I have never heard about "continuum regression" before. I should also say that I dislike this term.

A schematic that I did based on the @Martijn's one: 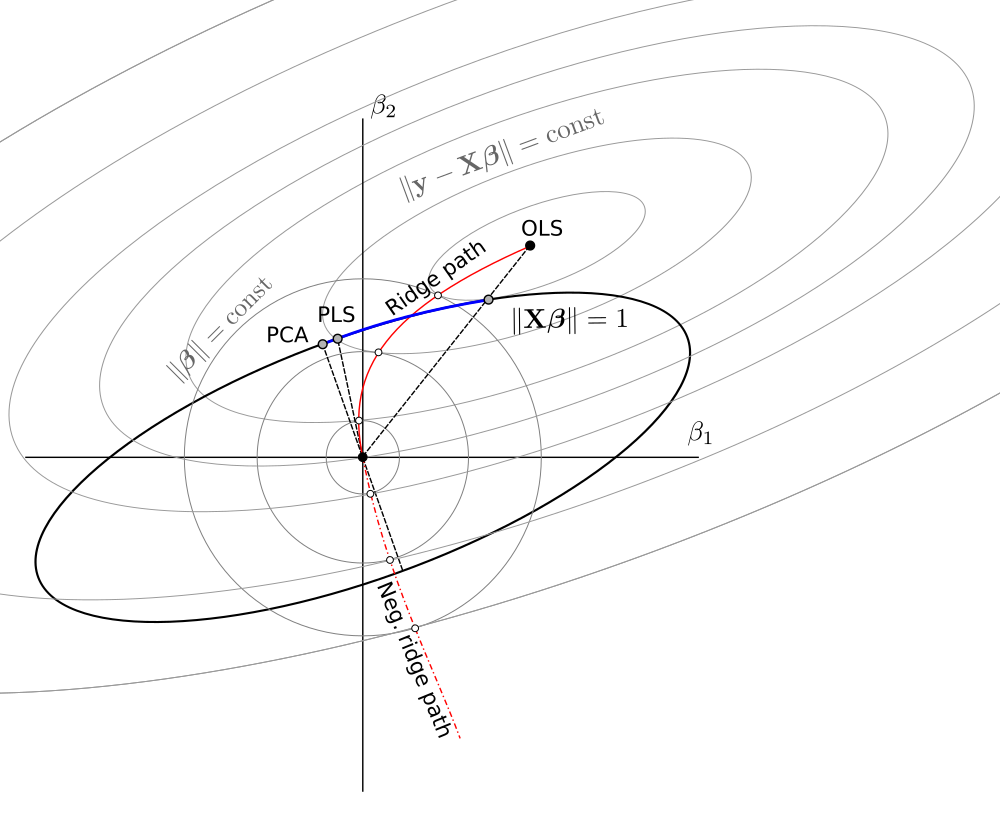 Update: Figure updated with the negative ridge path, huge thanks to @Martijn for suggesting how it should look. See my answer in Understanding negative ridge regression for more details.

Not the answer you're looking for? Browse other questions tagged pca regularization ridge-regression partial-least-squares constrained-regression or ask your own question.

83
Why is ridge regression called “ridge”, why is it needed, and what happens when $\lambda$ goes to infinity?
38
Theory behind partial least squares regression
16
Understanding negative ridge regression
3
Formulating Partial Least Squares as minimizing squared error

8
Variance-covariance matrix for ridge regression with stochastic $\lambda$
73
Unified view on shrinkage: what is the relation (if any) between Stein's paradox, ridge regression, and random effects in mixed models?
19
Under exactly what conditions is ridge regression able to provide an improvement over ordinary least squares regression?
83
Why is ridge regression called “ridge”, why is it needed, and what happens when $\lambda$ goes to infinity?
2
Deriving the Ridge Regression $\boldsymbol{\beta}\mid \mathbf{y}$ distribution
10
Lucid explanation for “numerical stability of matrix inversion” in ridge regression and its role in reducing overfit
6
How can I experiment with Lagrange multiplier in PCA optimization?
4
ridge regression parameter space
2
How to compute the change of Ridge regression solution when one row of data changes?