A line with a random length, attaching to the origin. What is the chance of a given point along 1D axis belonging to that line?

The question is based on an engineering problem and, due to my lack of knowledge in statistics, I found it difficult to express the question clearly in maths language.

The problem is formulated like this: 1) Imagine there is an origin, and a 1D coordinate system (say, L);

2) Along this 1D axis (L), there is a 'rigid' rod attaching to the origin, and its length is a random variable (always positive) and follows a PDF p1.

Question 1: for each given point on the axis L, what is the chance of that point belonging to the thread.

My solution to Q1: for a given coordinate x, for it to 'fall' into the thread, the thread length (a) has to be equal or greater than x. Therefore, the chance of a point x belonging to that rod is equal to the integration of that PDF, from x to infinity.

Can anyone please confirm if my solution above is correct?

If so, the question 2 is as follows: if the near end of the rod no longer attaches to the origin, but the location of it is also a random variable, which follows, say, another, PDF p2. Then, for each given point on the axis L, what is the chance of that point belonging to the rod?

I am so confused by this question 2, as I have no idea what I should do with the potential interplay between these two random events (i.e. the length of rod and the location of near end of the rod). I wonder if anyone here can help me with this, or at least let me know what kind of 'theory' I should look into for solving this problem?

The terminology of probability--outcomes, events, and random variables--was invented to help with such problems. But let's begin with a picture of the situation: 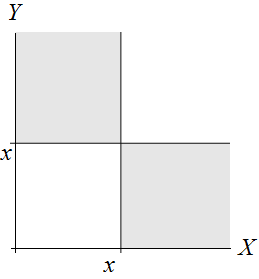 This figure plots possible values of the endpoints $(X,Y).$ They are random variables. The axes are copies of the line; its origin is at the bottom left where the axes meet.

Pick a point $x$ on the line, as shown simultaneously on both axes.

The distribution of $X$ is often described by stating what probability is assigned to the event $X\le x.$ This is the distribution function (aka CDF) of $X,$ $$F_X(x)=\Pr(X\le x).$$ In these terms, question (1) is answered using basic laws of probability (namely, the probabilities of disjoint events add) as

The joint distribution of $(X,Y)$ can be described by stating what probability it assigns to infinite quadrants whose upper right corners are at a location $(x,y).$ This is the distribution function $$F_{XY}(x,y) = \Pr(X\le x\text{ and } Y \le y).$$

We see that the "interplay of events" is visually captured by this two-dimensional picture. This is a general, powerful technique for reasoning about two random variables together.

Thus, the general answer to the second question is

The termini are said to be independent when $F_{XY}(x,y) = F_X(x)F_Y(y).$ In that case the general answer can be reduced to a formula in terms of $F_X$ and $F_Y$ alone by substitution in its last term.

9
“Since $x$ is near-gaussian, its PDF can be written as…”
10
Density of robots doing random walk in an infinite random geometric graph
4
Probability of an object of belonging to a group of objects
1
How do I get a pdf based on these acceptance-rejection simulation criteria?
0
What is the likelihood that the first of N unlikely steps occurs in the first 1/Nth of the total time, given that all N steps succeed?