It is well established that p-values are uniformly distributed when the null hypothesis is true. This follows from the definition of a p-value

The probability of observing a value (or more extreme one) when those values are drawn from the known, and fixed distribution (i.e. null is true). 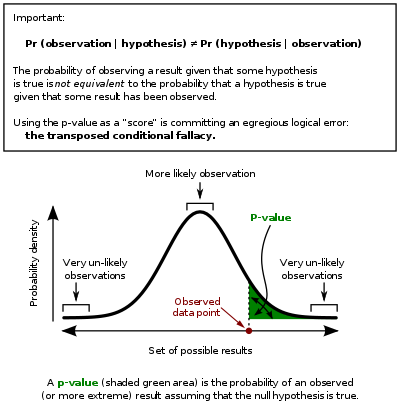 This fact allows for a range of follow up analysis when looking at distribution of pvalues.

It is then the uniform distribution.

Consider a mixture of two Gaussian with variance 1 and means 0 and 4. Its density looks like 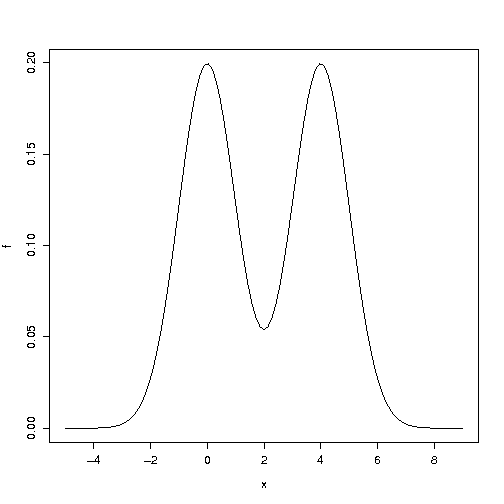 Now for the numerical experiment: 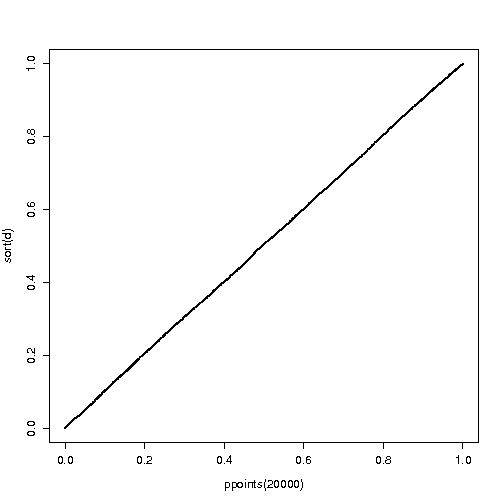 Short answer: The statistic you are referring to may just be the p-value (depending on the ordering of evidence for the null vs alternative. Don't assume that p-values are for the area that is "extreme" in the sense of having the highest magnitude values (i.e., the tail area).

It is certainly not the case that observations that are "more extreme" in the sense of being high magnitude (i.e., in the tail of a distribution) are necessarily more conducive to the alternative hypothesis than values like the one you highlight above. In fact, the most common measure used for the test statistic is the likelihood-ratio statistic comparing the null and alternative hypotheses. This test statistic orders the possible outcomes so that outcomes with lower relative likelihood for the null hypothesis (compared to the alternative) constitute greater evidence against the null. In this test, the p-value is the values that are "most extreme" in favour of the alternative, which is the set of values with low likelihood ratio:

where $L_0 \equiv \sup_{\theta \in \Theta_0} L_x(\theta) $ and $L_A \equiv \sup_{\theta \in \Theta_A} L_x(\theta) $ are the likelihoods under the null and alternative models. Now, if you were to show the likelihood ratio in your function instead of the null distribution, then the area you are calling a "d-value" would actually just be the p-value of the test. The critical region for the test would be a disjointed set of intervals on the horizontal axis.

The value you have highlighted in your diagram is based solely on looking at the null distribution, which means we cant really see what the proper ordering of evidence in the test is. But you shouldn't assume that the ordering is such that higher magnitude values are more evidence for the alternative (particularly with a multi-modal null distribution. Once you specify the likelihood for the alternative, you will be able to determine the ordering of evidence implicit in use of the likelihood ratio statistic and this will tell you what constitutes a "more extreme" value in your test.

Not the answer you're looking for? Browse other questions tagged hypothesis-testing distributions p-value uniform-distribution or ask your own question.

283
What is the meaning of p values and t values in statistical tests?