I am working with a set of genes for which I have both methylation values $\beta$ (continuous on unit interval) and gene expression $E$ (non-negative continuous) that I want to test for correlation $\hat\rho(log_2E,\beta)=R$. To filter out only the significant correlations I perform a permutation test where for each site I randomly permute $E$ a large number of times and calculate $R$. This gives me a distribution under the null hypothesis $p(R|H_0)$, i.e. when there is no dependence between $\beta$ and $E$, that I can compare $R$ against.

Now to my question,

I want to test both for positive and negative correlation. Do I make two tests per gene and use double multiple testing correction, where

or can and should I calculate a two-tailed p-value directly based on $|R|$ or such, and use normal multiple testing correction? I can only think of the following, but it feels wrong and has lousy power. 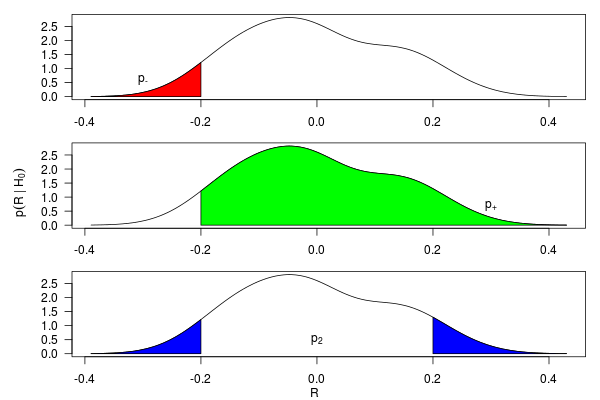 Edit: Updated the figure and added the missing x-axis label. The y-axis is the same for all panels.

Here is an R example of permutation testing. 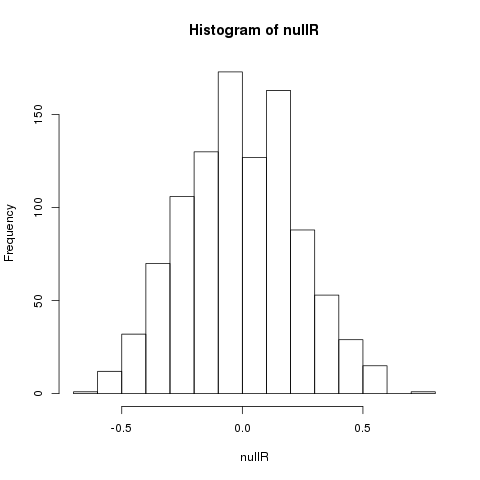 Not the answer you're looking for? Browse other questions tagged hypothesis-testing permutation-test or ask your own question.