Is there a canonical example of data which are conditionally independent? In other words, $X_1,\ldots,X_p$ are mutually independent given $Y$. This is the foundational assumption of the naive Bayes classifier but it's not clear to me which data generating processes it is best-suited to.

I know it's easy to come up with examples where the $X's$ are defined as a function of $Y$. For instance, $X_i|Y=y \sim N(y,\sigma^2)$ for each $i$ is one obvious case. However, these examples feel unnatural because the $X's$ are typically covariates and $Y$ is typically a response (at least with the naive Bayes classifier) so it's awkward when covariates are defined as a function of the response.

I'm interested only in cases where $Y$ is defined as a function of the covariates. An example of this might be $Y=\underset{i \in \{1,...,p\}} {\operatorname{arg\,max}}\{X_i\}$, though this example doesn't satisfy conditional independence. Are there any good alternative examples which do satisfy the assumption?

However, these examples feel unnatural because the X′s are typically covariates and Y is typically a response (at least with the naive Bayes classifier) (...) it's not clear to me which data generating processes it is best-suited to.

This is not necessarily true. It's easier to think of the Naive Bayes set up as a model where the $X$'s are caused by $Y$. As a canonical example, imagine $Y$ is a disease and $X$ are the symptoms. Your task is to predict the disease (cause) from the symptoms (effects). Then the Naive Bayes model would look like: 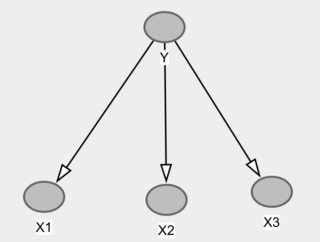 And in this case the $X$'s would be independent conditional on $Y$. Note however, that even in this case the Naive Bayes model is still very simplified, and it suffers from what is usually called the "single-fault" assumption.

I'm interested only in cases where Y is defined as a function of the covariates.

It's easy to see graphically that this will be very hard to do. If you draw a DAG where the $X$'s are the parents of $Y$, this is what you have now. 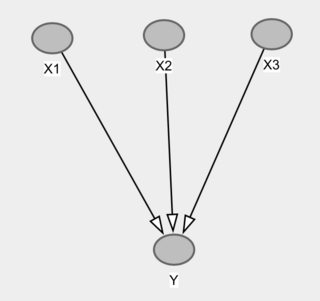 You can see that if you condition on $Y$ we would expect to make all $X$'s dependent, not the opposite. Thus, to create independence this way, you would need to fine-tune the parameters in order to make the $X$ independent conditional on $Y$, despite this structure. That is, you will have to generate a distribution that is unfaithful to the graph.

Thus, if you are trying to predict a consequence from its causes using Naive Bayes, this is a set-up where it's almost guaranteed by construction that the conditional independence of the $X$'s given $Y$ will not hold.

Not the answer you're looking for? Browse other questions tagged naive-bayes conditional-independence or ask your own question.

41
Why do naive Bayesian classifiers perform so well?
5
Balanced datasets in Naive Bayes
5
How to deal with mixture of continuous and discrete features when using Naive Bayes classifier
1
Alternative Smoothing techniques for Naive Bayes?
4
How to use TFIDF-vectors with Multinomial Naive-Bayes?
3
Naive Bayes and independence
0
Naive Bayes + KDE = Lazy?
1
What advantages does Naive Bayes have over the "not naive" Bayes?
2
How is this a "Bayes classifier"?