Econometrics: What will happen if I have a biased estimator (either positively or negatively biased) when constructing the confidence interval

Suppose that the OLS estimator for $\beta_j$ is in fact biased. How would this affect the use of confidence intervals as hypothesis testing tools (assuming a two-tailed test)? That is, what sort of erroneous conclusions would be made?

In either direction of the bias, you need to expect your confidence interval not to have the desired coverage properties.

Recall that, in general, a well-calibrated $1-\alpha$-level CI has the property that the intervals calcaluted from the recipe will cover the true value in $(1-\alpha)\cdot100$% of the cases it is computed. That result however hinges on the condition that the distribution of the estimator from which the CI is constructed is "correct." That is generally not the case when the estimator is biased.

Here is a little simulation illustrating the issue for the case of the LS estimator of the coefficient $\phi$ of an AR(1) model $Y_t=\phi Y_{t-1}+u_t$. It is well-known (see e.g. here) that this estimator is biased (downward), in particular for small $T$ and large $\phi$ when the regression also includes a constant.

Here is a plot of the confidence intervals for 60 draws from the underlying AR process, showing that these sometimes lie "too far to the left." 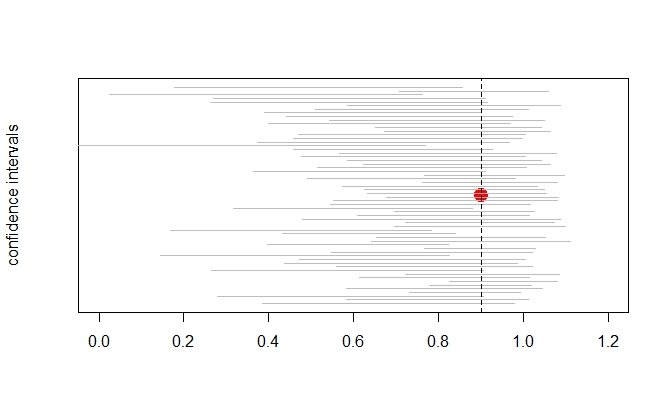 Not the answer you're looking for? Browse other questions tagged regression confidence-interval econometrics bias coverage-probability or ask your own question.

12
Why is OLS estimator of AR(1) coefficient biased?