Is my variance compatible with a Poisson distribution

I have data coming from a genomics experiment which consists of 100s of thousands of observations (RNA sequencing reads) from 18 different indeviduals. Some of the samples come from one tissue some from another. The number of reads (observations) for each sample is different.

For each sequencing read I have determined whether it fits a particular criteria (whether its alignment to the genome contains a gap). Thus the data looks something like:

I wish to test if the rate of gapped alignments is significantly different between tissues. The obvious model is Poisson with an offset. The model seems to fit reasonably well (studying residual vs fitted and scale-location plots etc).

As a summary I plotted a violin plot of the log percents, which with this many observations, you'd expect to be gaussian, and indeed they are. But I noticed that the variance is smaller than the mean, which shouldn't be the case if the data is Poisson right? The sample variance is around 20-50% of the mean.

This is a case of underdispersion, where the observed data is less variable than the model allows. As a distribution with only one parameters, the Poisson can only model one relationship between the mean and variance, namely equality. When the discrepancy from mean/variance equivalence is small, we might say the Poisson approximation is "good enough". Larger discrepancy suggests that a different model may be more appropriate. There are several other distributions, such as the Negative Binomial distribution, that have greater flexibility and are often used to improve efficiency/power in the presence of under/overdispersion. Negative binomial regression has become very popular for sequence data as of late. I recommend trying NB or another model and comparing it with the original Poisson model to see if there are any differences in inference.

Towards your first question, you want the evaluate the distribution of the sample variance, which does not have a closed form (see this post). You can, however, use simulations to get an approximation: 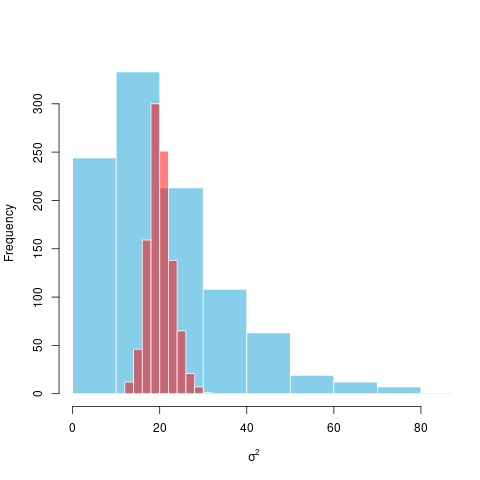 The plot above shows 1000 sample variances for groups of Poisson rvs with a mean of 20. Blue is sample variance for 5 samples, red is sample variance for 100 samples. As I suspected, the sample variance appears to be asymptotically normal with decreasing variance as the number of samples increases. With hundreds of thousands of true Poisson observations, this distribution will be extremely localized and your 20-50% difference suggests that the underlying distribution is not consistent with a Poisson model. However, a Poisson model might still be a useful approximation, especially if the difference in mean/variance is due primarily to the influence of a few outliers.

8
What is the distribution of the sample variance for a Poisson random variable?