What are some good exploratory analysis and diagnostic plots for count data? [duplicate]

Does anyone know of good reference material on exploratory analysis and diagnostic plots for count data?

Even given your extended description of your project in the comments it is, IMO, still too broad a question to give much useful advice. Specifically for analysis of categorical data (of which your count data would seem to fall within given the description), I would perhaps suggest the work of Michael Friendly. He published the books Visualizing Categorical Data and Discrete Data Analysis with R: Visualization and Modeling Techniques for Categorical and Count Data. It is specific to analysis in SAS respectively R. Potentially 20 values though will be a stretch for some (many?) of the suggested categorical displays.

For diagnostic plots, I would suggest John Fox's Regression Diagnostics green book. It is in the context of linear regression models, but the majority of same diagnostics (or very similar ones) can be utilized for generalized linear models as well.

I suspect most advice given in general for EDA for continuous data types could be fairly easily extended to low count data. So I wouldn't be fixated on looking for resources specific to count data. It matters more for models, but the way to graphically explore/present/diagnose those models should be fairly similar.

Have a look at this book (and associated R package) M Friendly: Visualizing Categorical data http://www.amazon.com/Visualizing-Categorical-Data-Michael-Friendly/dp/1580256600

I will give some examples with R and the package vcd implementing ideas from the above book (the book has code in SAS).

First some plots for investigating count data distributions. Counting the number of successes in a fixed number of trials, there is the binomial distribution. But if the assumption of equal success probability in each trial does not hold (or independence is violated) we might get some other distribution. I will use the famous dataset of gender distributions in families in Saxony.

This shows a hanging rootogram, a kind of histogram where the bars are hanging from the theoretical distribution curve, so deviations can all be compared with the x-axis. It is a "rootogram" because it shows square roots of frequencies, so that all deviations are on about the same scale (approximating the count in each bar with a Poisson distribution, for which the square root is a variance-stabilizing transformation). 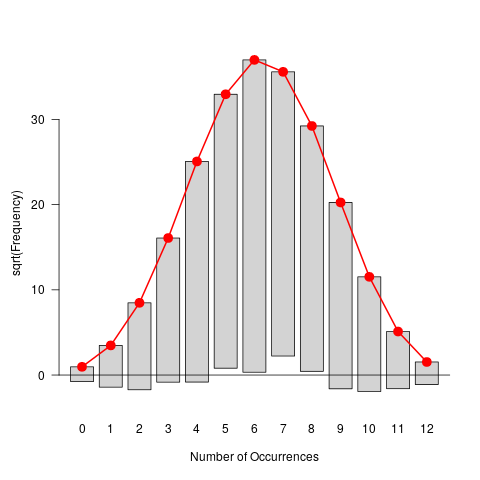 We can observe a systematic deviation from the binomial distribution. Then the same with a Poisson model, using the famous horsekicks data.

so in this case the null hypothesis of a Poisson distribution is not rejected. 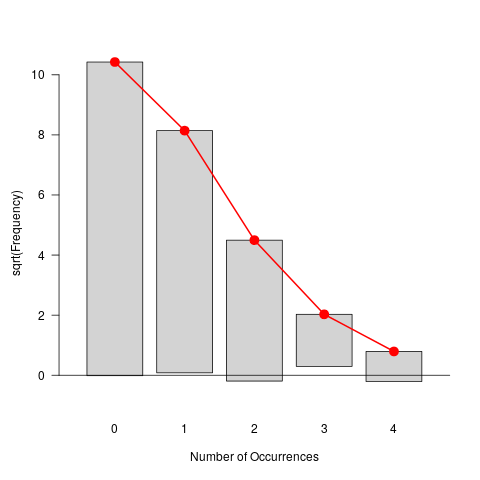 Contingency tables are also an example of count data, counting the occurrences in each cell of the table. We use the much discussed data of admissions at UC Berkeley.

We show this as a mosaic plot: 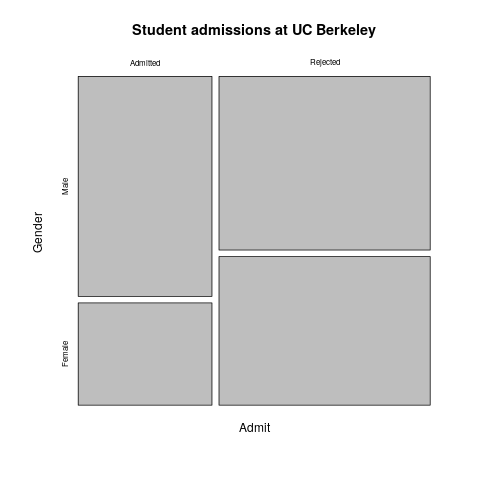 Which gives the impression that a larger proportion of females is rejected. But is this true? Prospective students are only competing with other applicants at the same department, not with all the other prospective students in general. So maybe we should do the comparison for each department separately. 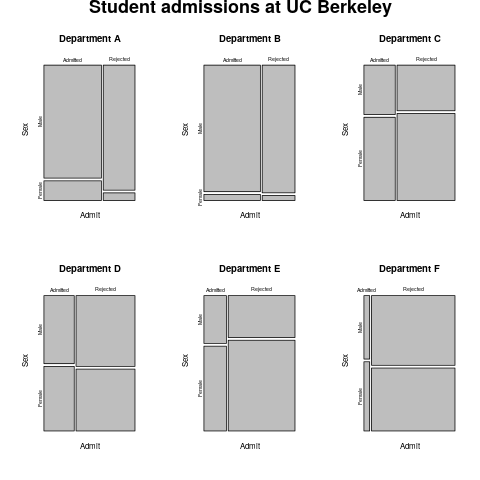 and now the conclusion is less clear.

Not the answer you're looking for? Browse other questions tagged data-visualization count-data references diagnostic exploratory-data-analysis or ask your own question.