I have to do some visualizations about vaccines. I downloaded data on reported cases of vaccine-preventable diseases (for example, measles, tetanus, etc.) here. These data are absolute values. I downloaded the population from here for each country and multiplied the value by 1000 in order to have the real population value.

Then, to calculate the rate of cases I used the formula:

Since it was a very small value, I multiplied this result by 1000:

Now I have to represent this data using the bubble on a map (for example a chart like that) and I thought of something like that. The scale I use is a sqrt scale, the data domain is [0, 1000] while the range of the circle radius is [0, 1700] (my choice). The circle is actually constructed with a radius that is related to the data. If valCas is the rate of death caused by measles in France in 2015, the radius is calculated in this way (I'm using D3.js):

The legend, however, how do I build it? I don't mean I want code but I need help in theory. Aesthetically it should be like this: 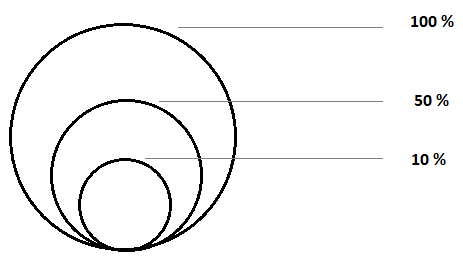 To do this I should use a code like this:

But what is the value of legendSize1, legendSize2 and legendSize3? I know it's a simple problem but I don't understand what to do, if what I've done is correct and makes sense or not. Is it better for me not to change the population value (do not multiply it by 1000)? Is it better that I don't multiply the rate by 1000?

This is what I understand: 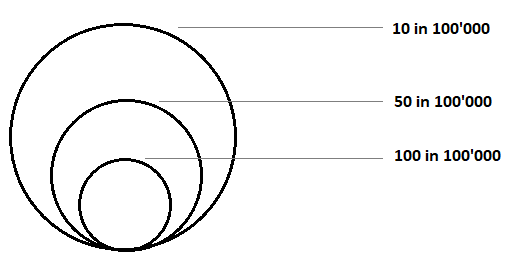 I recommend you don't multiply your data by either $100$ or $100,\!000$, instead, introduce a scaling constant for the plotting and multiply all the computed radii (both in the legend and in the figure) with that constant to scale the circles by the same factor. So that it's a modifier of the plotting, not of your data. Try out different values until you're satisfied.

I don't see what programming language you're using. I don't know whether circleScale is your own function or it is supplied by the programming environment. It makes it harder to verify what you're doing but these instructions should already help you achieve your goal.

Avoid using a comma as a decimal point, use a point. (There are some natural languages whose spelling rules require a comma but I have never seen a computer programming language do that. In programming, it will cause unexpected problems because the interpreter thinks you have two distinct numbers: 81066 and 228.) Delete the decimal point or (if you have many countries) leave the decimal point where it is and multiply the number by $1000$ to get actual population number: Germany, 2012, population = 81066228 or Germany, 2012, population = 81066.228*1000.

The necessary documentation for d3.js is here. Forget what I wrote about introducing a scaling constant. One option is to play with the value in the range in circleScale (which is now set to 1650) until you get circles of the required size. Be careful: in point 4. of your EDIT, range is what will become range of area = circleScale(valCas) in point 5. This is the range of the area, not of the radius as it is said in your point 4: .range([0, 1650]); // range of circle radius. The comment after // is incorrect.

I hope this works.

Be careful: your labels in the figure are now reversed, currently the largest circle has the smallest number!