I fitting dose response models to some data where I have been using the 4 parameter log logistic model from the drc package in R. For the most part, this model does a fine job modeling the dose response relationship but every now and then the model does a very poor job when there is just one extreme outlier. You can see what I am talking about in the following plot: 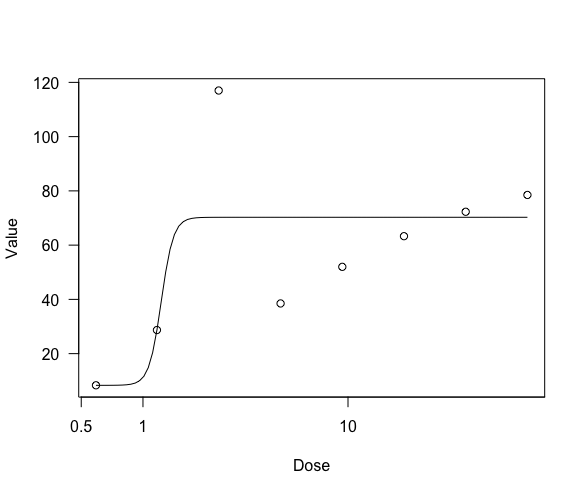 The other part might be that I don't want to have a strong monotonicity assumption as you see the monotonic relationship doesn't have to hold.

I don't have a lot of experience in this area and was wondering if there are models that are robust to single outliers that are used for dose response modeling? Any suggestions are greatly appreciated.

dr4pl coauthor here. That kind of "outlier" is -exactly- why we wrote dr4pl with the assumptions and bounds that we did.

dr4pl's loss function is specifically weighted to downplay strong outliers. Our vignette is full of examples like the question. Our exact motivation behind these changes was because in clinical data and other rare samples, we have little ability to assess what is a true outlier, a mistake, or natural variation in the data. In the interests of preserving the ability of future researchers to make their own decisions about what that point represents, we wrote an alternative. I think most researchers would agree that the true IC50 is not likely to be well captured by the figure in question, so it makes sense that we should explore alternative approaches.

I highly recommend you check out some nearly identical examples in the vignette, If you're specifically interested in the monotonicity assumptions, I'd recommend reading the section in the paper (ahead of print) http://rjournal.github.io/archive/2019/RJ-2019-003/index.html

The drc package is currently available on CRAN: https://cran.r-project.org/web/packages/drc/index.html. According to the above-mentioned research article, drc is a flexible and versatile package for dose-response analyses in general. The package provides a user-friendly interface for:

In case this might help, see also the dr4plpackage, for which you can find some usage examples here: https://cran.r-project.org/web/packages/dr4pl/vignettes/usageExamples.html.

I think a third answer that belongs here is this: You need to be clear what you want in a "robust" estimator.

Robust is used with a lot of ambiguity in the statistical literature. It can mean:

My contention with the second sense of robust is that it exonerates statisticians from doing any thinking. If the "value" of 120 is wrong (clinical error), then delete it. But if it's not an error you need to figure out why it's there. Is this a longitudinal design? Was second dose applied before first was metabolized/cleared? Did the subject have liver or kidney damage and drug metabolism was slowed and response shows the cumulative effect? Could there be a U-shaped (logistic) curve relating dose and response? This is the power of 3+3 designs for evaluating dose-response.

But mainly it is the third sense on which there is some disagreement. The 4 parameter logistic model is indeed quite robust, having intercept, shift, slope, and scale terms. However, it cannot fit a "non-linear" sigmoid. So if 120 is "right" you need a different model, or a clearer understanding of the drug and its properties.

If you just want to fit an x-y curve, consider using a smoothing spline as an input to a least squares model. This can be quite challenging both in terms of fitting, interpreting, and generalizing to predict response in other scenarios.

You might consider a more sophisticated time series if the 120 was just a result of applying the second dose too soon. Consider modeling the area under the (dose concentration) curve as an input or "x" variable in the analysis instead.

Not the answer you're looking for? Browse other questions tagged modeling dose-response or ask your own question.

0
Discretizing Continuous Outcomes: good examples?
1
Inverted dose-response variables
1
Inference on the minimizing/maximizing value of $x$ in a regression
2
How is the Williams test in R related to glht with mcp set to Williams?