Hi guys I have a very strange result

My Spearman correlation says there is no correlation between temperature and number of users (alpha 5%). Data is autocorrelated, non normal, heteroskedastic. That is why I go for non parametric

Yet if I do the Theil-Sen estimator, I get a significant slope 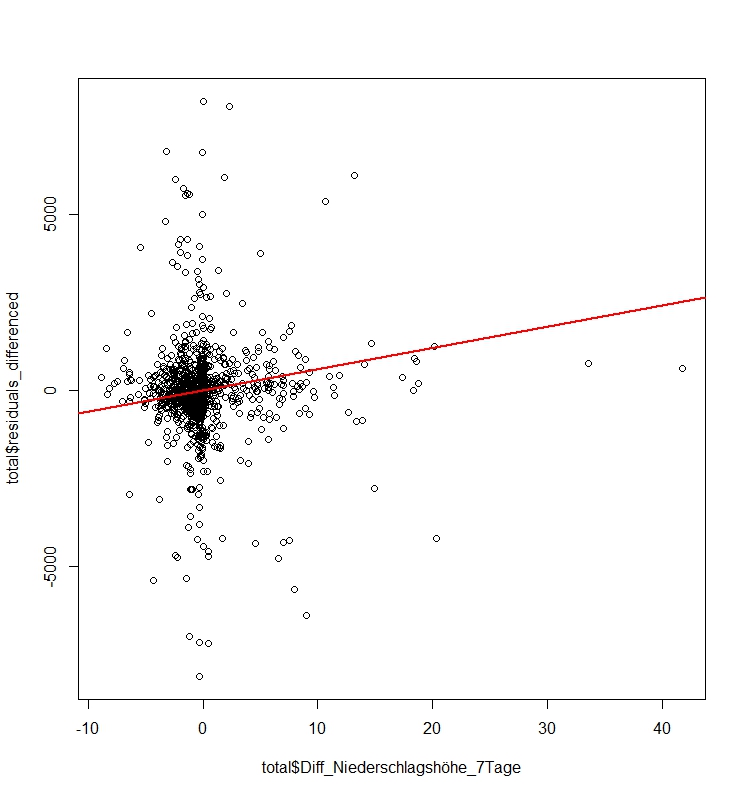 Which test should I trust ?

Because the data are autocorrelated, none of the tests you do have their nominal properties. That is, your p-values will be wrong in any case.

However, the issue you raise about the difference would remain even if the autocorrelation issue were not present, so it's worth answering as if that were not at issue.

Theil-Sen regression corresponds to the slope estimate that would leave the Kendall correlation between residuals and x at 0.

That is, normally I'd expect to test whether the population version of a Theil-Sen regression coefficient is different from 0 using a test of Kendall's tau on (x,y).

Without knowing what function you called (as the post stands at this moment), I can't know for sure that's what test was used but it would be the obvious candidate.

A test of the Kendall correlation will not generally yield the same p-value as a test of the Spearman correlation and it's easily possible to get samples that will reject for one and not for the other: 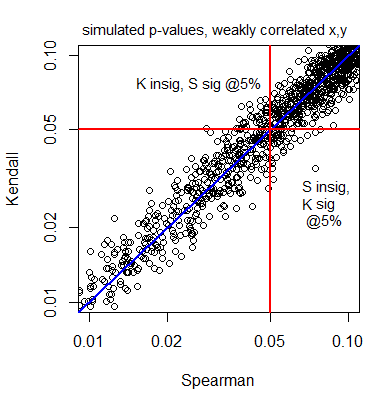 This simulation was for samples with n=100.

The plot has been truncated to only show p-values between 1-10% on both axes. Axes are log-scaled. The plot shows a tight spread about a straight diagonal upsloping line -- indicating that p-values tend to be pretty similar for both tests for the sort of data I generated -- but there are quite a few samples that are significant at 5% for one test and not for the other test, in both directions.

Particular kinds of pattern for the relationship between x and y can produce substantial deviation in the values of the correlations, and the p-values can sometimes tend to differ quite a bit - the two tests are more sensitive or less sensitive to different kinds of pattern.

Consequently the result you see is not necessarily surprising.

If you want a slope estimate (and thereby, test and CI) that directly corresponds to the Spearman correlation, this is relatively straightforward for a root-finding algorithm.

Not the answer you're looking for? Browse other questions tagged spearman-rho or ask your own question.