Schölkopf's One-class SVM: Role of $\rho$ in the cost function

It seems to me there there is nothing in these equations that stop variable $\rho$ from increasing without bounds in trying to minimize $L$. 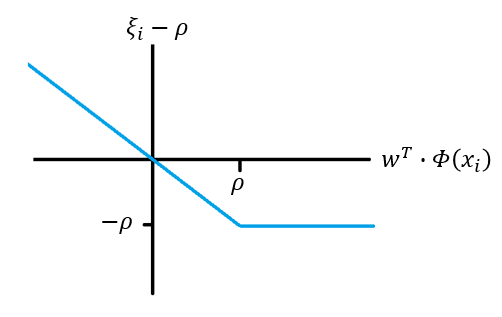 Conversely, if a point lies outside the margin, then increasing $\rho$ will have an effect of decreasing $\xi_{out} - \rho$.

Therefore, it seems like to minimize $L$, we are allowed to increase $\rho$ until $\rho = max(w^{T}\cdot\Phi(x_{i}))$ i.e. all the points lie on the 'wrong' side of the margin. Surely, this cannot be right. Am I missing anything in my logic?

The short answer is: I have been fooled by parentheses. The correct reading of the loss function is

Therefore there is tension between increasing $\rho$ for the last term and the increase in the sum of slacks in the middle term as $\rho$ increases.

Not the answer you're looking for? Browse other questions tagged svm or ask your own question.

2
SVM: Does C increase variance or stability (bias)?
9
SVM cost function: old and new definitions
3
What is the effect of constraining the sum of the support vectors' coefficients of an SVM?
0
Hinge loss proof