My question is a general one: I have sequences of categorical variables (click stream) that I analyzed using TraMineR.

I now want to conduct cluster analysis (CA) using the WeightedCluster package. An important step in CA is detecting outliers (before or after clustering). I read the package's manual, but couldn't find any reference to outlier detection. How can this be done on categorical sequences?

A first solution would be to detect outliers from the distances between the sequences and a representative sequence such as the medoid. You get the distances from the medoid using for example the disscenter function of TraMineR. (See the help page of that function.) Once you have these distances, you can define outliers as those sequences that lie at more than say 2 or 2.5 times the pseudo standard deviation from the medoid. The pseudo standard deviation is obtained with the dissvar function.

Alternatively, you could consider multiple representatives instead of a single one. (See Gabadinho and Ritschard, 2013.) In that case you would retain the distance of each sequence to its closest representative. I illustrate below using the 2000 sequences in the biofam dataset that ships with TraMineR. 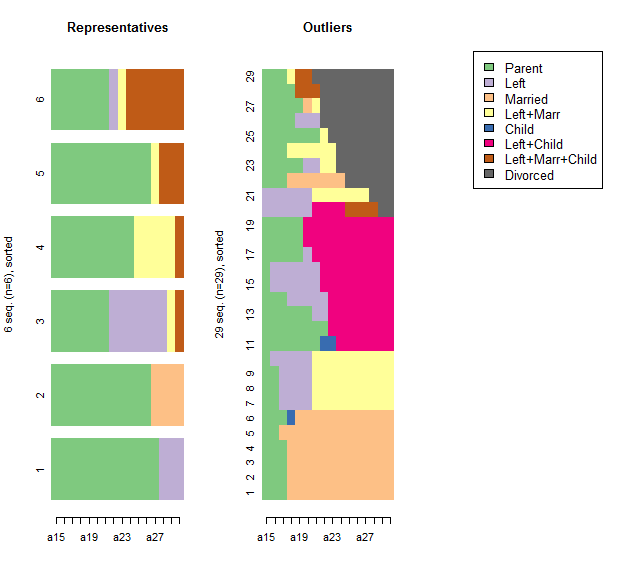 Not the answer you're looking for? Browse other questions tagged clustering outliers traminer or ask your own question.

1
Detecting outlier points WITHOUT clustering, if we know that the data points form clusters of size $>10$

40
Detecting Outliers in Time Series (LS/AO/TC) using tsoutliers package in R. How to represent outliers in equation format?
8
Outlier detection with data (which has categorical and numeric variables) with R
5
Detect unusual trends and anomalies using mixed data (categorical and numerical)
6
Gaussian Mixture for detecting outliers
4
Is (a) multicollinearity and/or (b) binary variables an issue for DBSCAN? if so, how can one correct for these issues?
0
Can I use anomaly detection models as outliers and novelty detection?
2
When should you remove Outliers - Entire Dataset or Train Dataset?