When is weighted average of $F_1$ scores $\simeq$ accuracy in classification?

I have a classifier which classifies between 2 classes, $\mathbf{A}$ and $\mathbf{B}$. Say we have the confusion matrix below:

This value is very close to the accuracy. In fact they are equal up to 4 decimal places.

The classifier in question was trained by splitting the labeled data into a training and test set randomly. The training set was used to train the classifier and then the performance was measured on the test set.

This was repeated for different splits of the data into training and test sets. For every permutation, the accuracy and $F_1$ score are different but they are always close. They seem to fluctuate in the range $[0.9,0.97]$, and they fluctuate together.

What does the accuracy and weighted average of $F_1$ scores with the support values as weights being so similar imply in a classification over 2 classes? Are the values always similar or does this observation imply something about my data or classifier? If the values are not always so similar, in what scenarios would they be significantly different?

I have checked this question which has a somewhat similar title, but it’s unrelated to what I’m asking.

Assessing the difference between a support-weighted mean $F1$ and accuracy 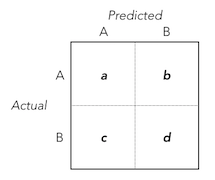 Finally, in the same regard, the function for the classification accuracy can be defined as: $$ Accuracy = \frac{a+d}{a+b+c+d} $$

Therefore, the difference between the two statistics is smaller when the $\frac{ac+2ad+bd}{(a+b+c+d)^2}$ component of the support-weighted mean $F1$ (let's just call this the '$SWM\text{ }F1$ component') is minimal.

Using R, I simulated 2000 confusion matrices (with $a, b, c, d \sim Uniform(0,100)$) and created the following plot to demonstrate the influence of this $SWM\text{ }F1$ component on the difference between the two statistics: 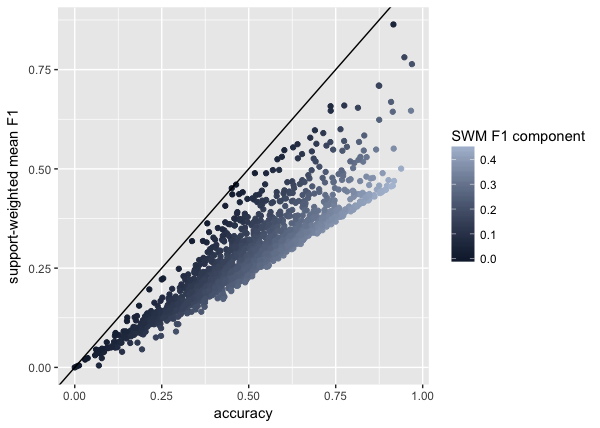 The plot shows that small $SWM\text{ }F1$ components contribute to heightened similarity between the two statistics.

...and back to your question

It is also worth noting that test sets with small $n$ (as can be deduced from the component's formula) will be less likely to produce large differences between the two statistics.

Not the answer you're looking for? Browse other questions tagged machine-learning classification data-mining accuracy model-evaluation or ask your own question.

11
Is f-measure synonymous with accuracy?

11
Classifier performance measure that combines sensitivity and specificity?
0
Analogue of F1 beta score when formulating a classification as a regression
4
Summarising Precision/Recall Measures in Multi-class Problem
2
F1-Score in a multilabel classification paper: is macro, weighted or micro F1-used?