I've a question regarding to the graphical intuition of the LASSO. I'm understanding why the lasso produce zero coefficient in case of intersecting a corner of the diamond. But I don't understand the case when the lasso Regression just shrink the paramters and don't set them to Zero. So if the RSS lines intersect with the "side" of the diamond. Assume in the case of the figure, that $\beta_1$ bigger and $\beta_2$ smaller. So the RSS-line would likely intersect a side. 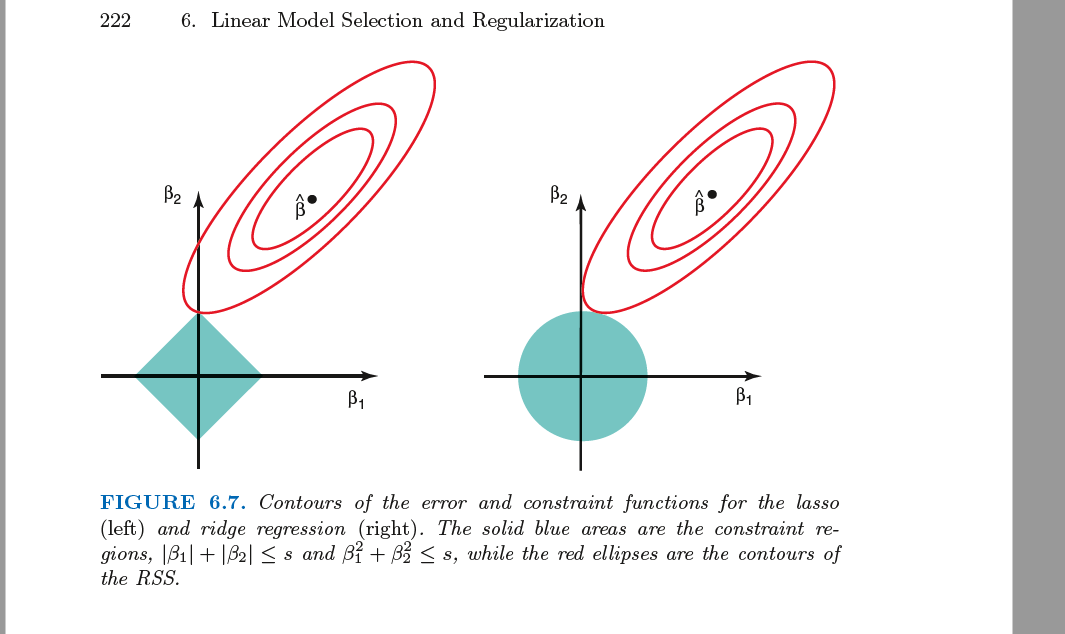 This last bullet is important in answering your question:

Here is a graph I have produced based on simulated data. It shows the optimal solution for ridge and lasso regression as a function of the $\lambda$ parameter (lasso is on the right hand side).

You can see that there are many solutions that are not on the vertex of the diamond!

The impact of strongly correlated features

This simple example shows what happens when the two features are highly correlated, in fact here $x_1 = x$ and $x_2 = x^2$ so they are so strongly correlated that the shape of the OLS cost function looks like an upside-down ridge, or a valley - hence the intuition behind the name ridge regression.

This post is strongly based on my previous post - For anyone interested, you can find most of the code and associated mathematical derivations on my blog and at this page

The role of the diamond is pretty clear, I guess: in brief, the region where the the (two in this picture) coefficients are such that the sum of their absolute values does not exceed the "budget" $s$.

The ellipses denote regions where the sum of squared residuals take identical values. The OLS estimate $\hat\beta$ is, by its very definition, the point where that sum is smallest. Hence, the further we move away from that point, the larger the sum gets.

We now seek a point that is such that it touches the region where the budget constraint is met while at the same time making the sum of squared residuals no larger than necessary.

8
The graphical intuiton of the LASSO in case p=2
9
Why L1 regularization can "zero out the weights" and therefore leads to sparse models?
1
L1 vs L2 norm - Circle and Diamond
112
Why does the Lasso provide Variable Selection?
5
How does Ridge Regression penalize for complexity if the coefficients are never allowed to go to zero?
3
Graphical path Coordinate Descent in case of semi-differentiable functions such as Lasso

5
LASSO with two predictors
5
LASSO and compatibility constant
1
The Co-efficients of predictors in Lasso
5
Lasso, what happens if we dont standardize data and multiply one column with 10
3
Consistency of Adaptive LASSO
9
Understanding Lasso Regression's sparsity geometrically