LASSO: Deriving the smallest lambda at which all coefficient are zero

I'am trying to derive mathematically the lowest $\lambda$ at which all coefficients are zero, reffering to the Exercise 2.1 of the book Sparsity with Statistical Learning. The result should be $\lambda_{min}=\max_j |X_j^Ty|$. I hope this isnt a duplicate, because it is also discussed here. However my math skills are very restricted, so I don't understand the solution. I hope that someone can help me to understand the mathematical details behind the derivation. The LASSO is defined as:

My approach was following the KKT-conditions, we get

EDIT: The Exercise question of the book is: "Show that the smallest value of such that the regression coefficients estimated by the lasso are all equal to zero is given by"

EDIT2: Source of the KKT-

I think that the question is not so much a duplicate and a useful addition. The issue of finding the smallest $\lambda$ for which all coefficients are zero has occurred before on this website but not explicitly as a question (which make this question an useful reference point).

Something is wrong with your formulation using the KKT conditions

I do not know the Karush–Kuhn–Tucker (KKT) conditions for non differentiable functions but the equation (9), $X^T(y-X\hat\beta) = \lambda s$, that you quote does not seem right, it is probably a typo or something like that. The left hand side is the gradient of $\frac{1}{2}||y-X\beta||_2^2$ but it should be the directional derivative ($\nabla_\vec{s}$) instead (or something related).

To explain the problem more intuitively we are going to use a geometrical interpretation of the algorithm for LARS (least angle regression. LARS gives, at least, for $\beta$ sufficiently close to zero gives the same set of solutions as LASSO)

With LARS solutions for the optimization problem are found as a function of $\lambda$. These solutions are found by following a path along which the residual sum of squares term decreases the most for a given change in the norm term $\beta$.

In other words. LARS gives you the initial decrease of the SSE-term (sum of squared error) as you increase the length of the vector $\beta$ (the penalty term) and the ratio of these is then equal to your $\lambda_{max}$

The image below explains the concept how the LARS algorithm can help in finding $\lambda_{max}$. 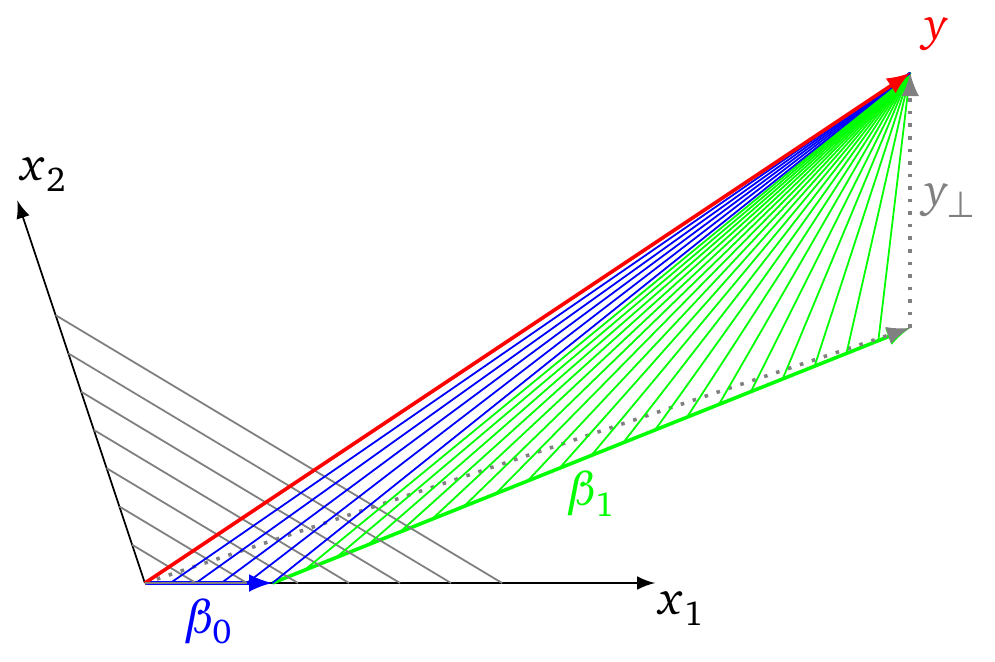 Not the answer you're looking for? Browse other questions tagged machine-learning mathematical-statistics lasso algebraic-statistics or ask your own question.

2
What is $\lambda_{min}$ that makes all regression coefficients zero in LASSO regression
16
What is the smallest $\lambda$ that gives a 0 component in lasso?
8
Lasso and Ridge tuning parameter scope
6
How is the minimum $\lambda$ computed in group LASSO?
1
When modified LARS implements LASSO, what's the corresponding lambda

9
Least angle regression keeps the correlations monotonically decreasing and tied?
9
Range of lambda in elastic net regression
16
What is the smallest $\lambda$ that gives a 0 component in lasso?
6
How is the minimum $\lambda$ computed in group LASSO?
2
Minimum and maximum regularization in L0 (pseudo)norm penalized regression