Back-door adjustment:The archetypal epidemiological problem in statistics is to adjust for the effect of a measured confounder. The back-door criterion of Pearl generalizes this idea.

Front-door adjustment: If some variables are unobserved then we may need to resort to other methods for identifying the causal effect.

The page also comes with precise mathematical definitions for the above two terms.

How do you make a layman understand the difference between back-door and front-door adjustment, based on the above mathematical definitions?

Let's say you are interested in the causal effect of $D$ on $Y$. The following statement are not quite precise but I think convey the intuition behind the two approaches:

Back-door adjustment: Determine which other variables $X$ (age, gender) drive both $D$ (a drug) and $Y$ (health). Then, find units with the same values for $X$ (same age, same gender), but different values for $D$, and compute the difference in $Y$. If there is a difference in $Y$ between these units, it should be due to $D$, and not due to anything else. 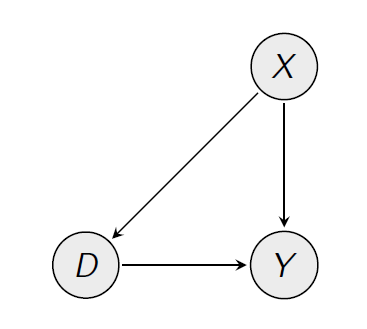 The relevant causal graph looks like this (where $U$ is not observed): 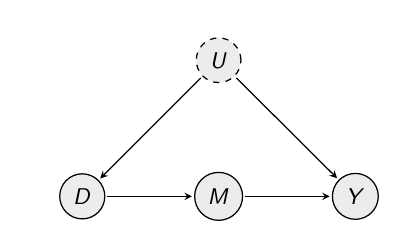 Similarly, the $M \rightarrow Y$ effect is identified because the only back-door path from $M$ to $Y$ runs over $D$, so you can adjust for it using the back-door strategy.

32
If 'correlation doesn't imply causation', then if I find a statistically significant correlation, how can I prove the causality?

14
Causal effect by back-door and front-door adjustments
5
Understanding Judea Pearl's Back-Door Adjustment Formula
5
Front-door criteria - what does the second requirement mean?
6
What justifies adjusting for proxy variables in the DAG causal inference framework?
2
Intuition behind conditioning Y on X in the front-door adjustment formula
1
Blocking on descendants in a givenDAG
2
Front door formula - calculation in practice
7
Do-Calculus for Causal Diagram 7.5 from "The Book of Why" (napkin problem)
1
Pearl's Front-door and Back-door
2
Causal Inference in a Bayesian Network with unobservable backdoor and no frontdoor