How much lung cancer is really caused by smoking? [closed]

Ask Question
Asked 4 years ago
Modified 4 years ago
Viewed 7k times
28
$\begingroup$
Closed. This question is off-topic. It is not currently accepting answers.

This question does not appear to be about statistics within the scope defined in the help center.

On tobacco products one can often see the statistic that nine out of ten lung cancers are caused by smoking but is this number accurate?

I am sceptical about this stat for two reasons. 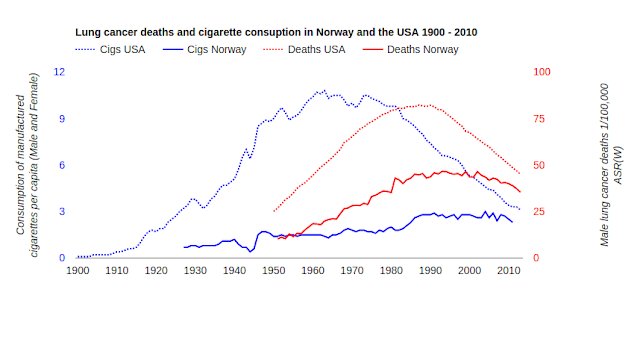 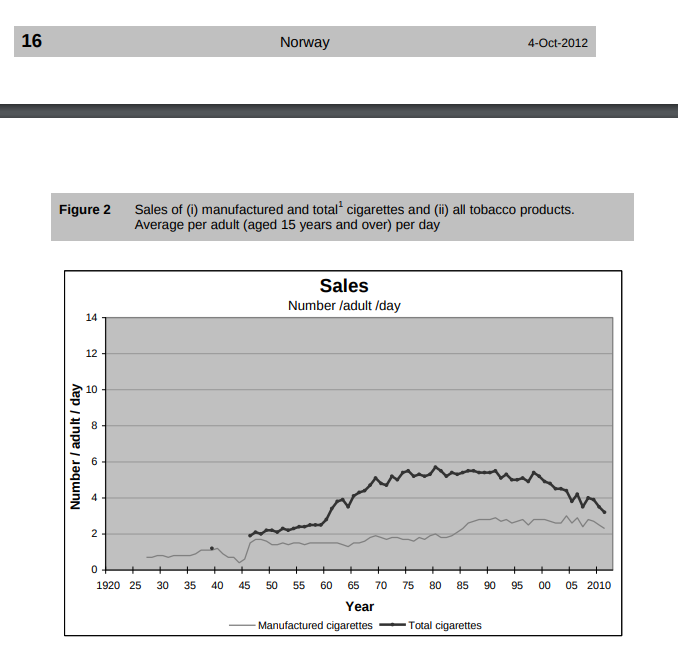 In addition to the curiosity of Norway there is another problem because in a country such as the USA millions of people have been encouraged to quit smoking over decades and lung cancer rates have gone down. But in former soviet union countries millions of people have not been encouraged to quit smoking and as a result per capita cigarette consumption has been stable in these countries to this day. 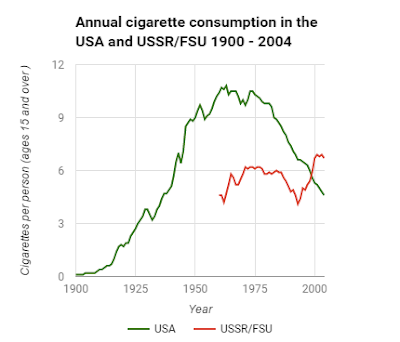 So quite by accident, we have a massive experiment (billions of subject years) to see if encouraging millions of people over many decades to quit smoking makes any difference to lung cancer rates. It is arguably, I would guess, the biggest experiment into smoking and lung cancer ever. Here are male lung cancer for three countries the USA (population 325.7 million ), Russian Federation (population 144 million) and Ukraine (population 45 million). 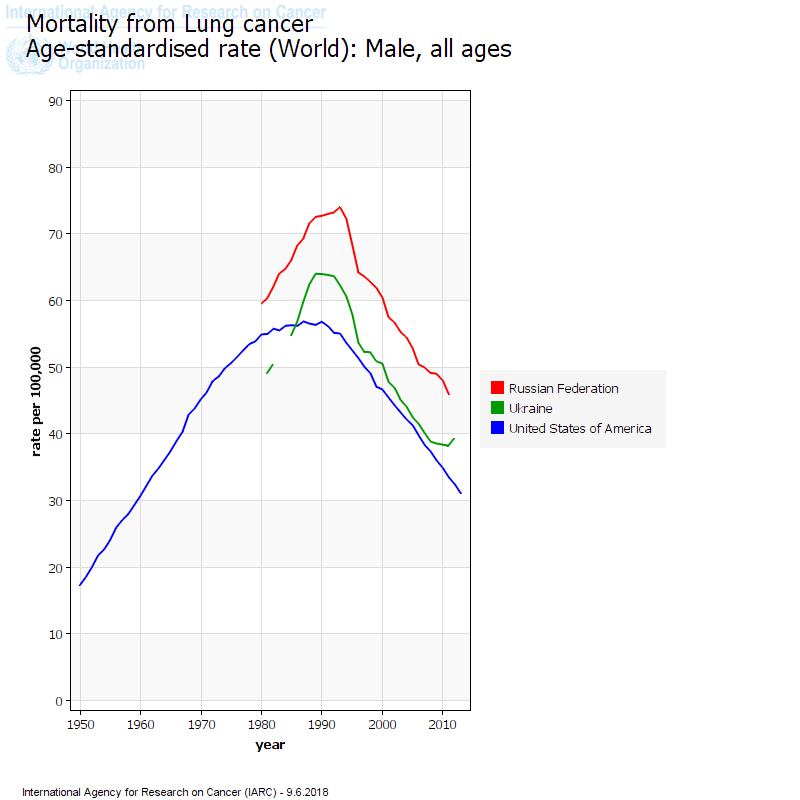 Clearly, male lung cancer has declined in these countries in the same way as in the US but without a preceding decline in smoking.

Secondly, in the US, according to the following National Health Survey , 17.9% of lung cancer occurs in never smokers, table reproduced below and original can be found here.

In my mind, the figure of 17.9% of lung cancer that occurs in never smokers makes the nine out of lung cancers caused by smoking as untenable.

I would guess that to calculate this number all you really need to know is what percentage of the adult population are never smokers but I have found this number surprisingly elusive for the US. The closest I can find is in this study that states that in the US never smokers make up 22.2% of the population, current smoker 39.4%, former smoker 38.5%.

So having given a few relevant epidemiological statistics (and hopefully interesting to readers) as to why the number of lung cancers caused by smoking may not be quite as high as nine out of ten my question is as follows:

For the US data:

You are confusing two important but different concepts in epidemiology: prevalence and incidence. A Wikipedia page describes the difference.

The Table 2 that you present, however, is for "age-adjusted prevalence" of smoking status among people who presently have each of the listed diseases. Prevalence has to do with the fraction of each type of case that is found at a given time. Of people currently having lung cancer, 17.9% have never smoked.

There's a big difference between prevalence and incidence here because smokers tend to die of lung cancer (and of other cancers, or from other causes) more quickly than never smokers. So at any given time, never smokers will thus be a higher fraction of all lung cancer survivors (prevalence) than their fraction in the total numbers of original cases (incidence).

For the Norway data:

Here, $P_{{\rm pop}}$ is the proportion of exposed subjects in the population, and RR is the relative risk of developing the disease if you're exposed.

Not the answer you're looking for? Browse other questions tagged epidemiology population-attributable-fraction or ask your own question.