I have a human intelligence task test which tries to get the best option from a set of options tested against a control group.

The test consist of: 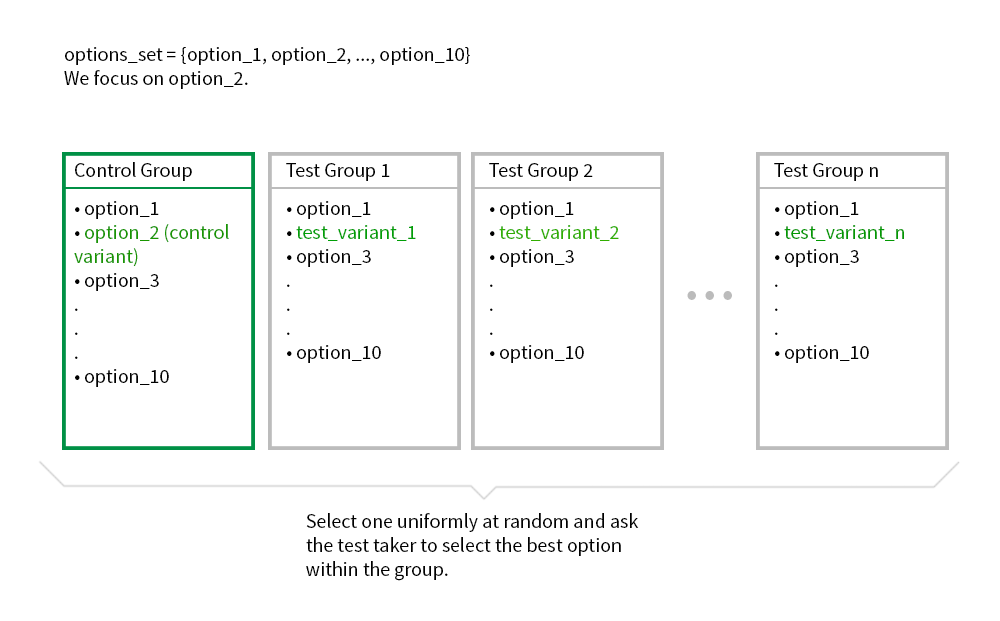 I want to measure which among the control variant and the test variants is better to the test takers. For instance, we could select the variant which would be selected more times with respect to its group options, i.e., if a group is shown to the test takers k_i (with i = 1,2,...,n) times (ideally the same value 500/n), select the variant with higher selection rate with respect its own group options in the k_i samples.

I'm not an expert, but I clearly see that the way I run the test introduces some problems. For example, what clearly establish that this approach would lead to the best variant according to the test takers criteria? How much confident am I on this? Clearly the shown groups won't be perfectly selected uniformly. Will the samples amount lead to a significant result?

Some friend told me that I would be interested on reading about chi-square tests, and sent me this article: https://www.lunametrics.com/blog/2014/07/01/statistical-significance-test, but I don't completely understand if this would be applied to the problem.

How can I infer what is the best option according to the described test with high confidence? Can you share with me some concepts, articles or books to learn about this kind of problems?

The "best" option should be the one with more rate of selection among all test takers.

Therefore, you can compare the value of $p$ with respect to some $j$ amongst each $i$.

Because you suggest there will be multiple variants, tests like a two-proportion test won't cut it. Instead, your main option is (as your friend suggested) a Chi-squared test.

The power of your test, i.e. the likelihood of detecting some effect assuming the effect actually exists (an effect being something along the lines of "option $j$ has a higher selection rate $p$ for some particular group $i$"), is going to heavily rely on your sample size ($\approx \frac{500}{m}$) for each group and the actual magnitude of the effects at hand.

Without having a good idea of the number of groups and the context of the problem, it is difficult to infer the power of your proposed test design.

The main takeaway is that if the expected difference in selection rates between groups is higher, you could expect your test's statistical power to also be higher.

Not the answer you're looking for? Browse other questions tagged self-study statistical-significance chi-squared experiment-design or ask your own question.

5
Data analysis for mixed within-subjects/between-subjects design?
6
How to compare two groups with multiple measurements for each individual with R?
4
How to determine if % selecting Option A is statistically different from selecting Option B in a survey?
0
How to apply a statistical test to my Western blot result?
1
How to Compare Two Algorithms with Multiple Datasets and Multiple Runs