I'm trying implement Manifold Regularization in Support Vector Machines (SVMs) in Matlab. I'm following the instructions in the paper by Belkin et al.(2006), there's the equation in it:

The problem here is, I'm trying to train SVM using LIBSVM in MATLAB but I don't want to modify the original code, so I have found the precomputed version of the LIBSVM which instead of taking input data, and output groups as parametes, gets Kernal matrix computed and the output groups and trains the SVM model. I'm trying the feed it with the regularized Kernel matrix (Gram Matrix) and let it do the rest.

I tried to find the formula which regularizes the Kernal and came to this: Defining $I$ as the identity matrix with the same dimension as the Kernel Matrix, $K$

In which $L$ is the Laplacian Graph Matrix, $K$ is the Kernel Matrix and $I$ is the identity matrix. And $Gram$ is computed using inner multiplication of two matrices $K$ and $G$.

Is there anyone who can help me figure out how this is computed?

While I did not test it, reading the article, the optimization problem, both for SVM and LapSVM, is given as:

While for LapSVM we have the following (added parentheses to make the relationship clearer):

I can confirm that it works. See this example with a Gaussian kernel, and how the class virginica starts creeping into the unlabelled data when $\gamma_I = 2500$ compared to $\gamma_I = 0$, which is the standard SVM. 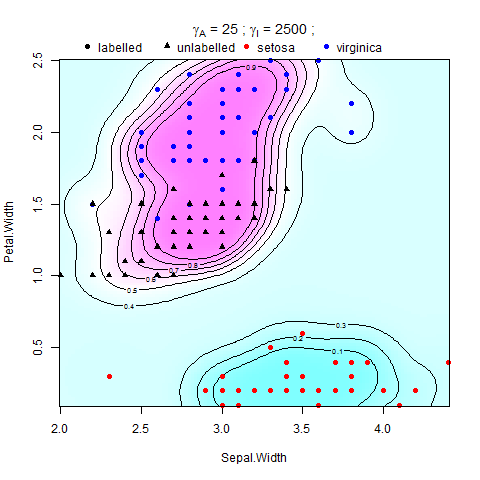 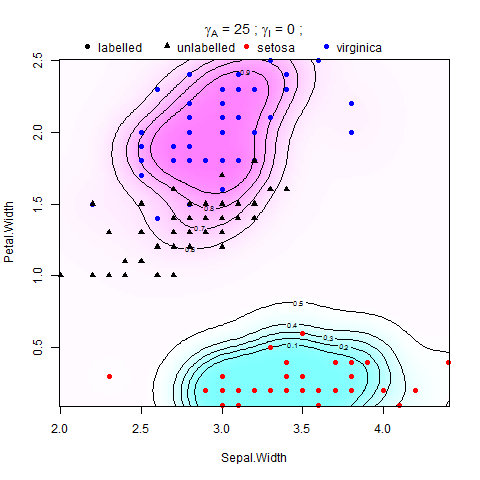 Not the answer you're looking for? Browse other questions tagged machine-learning svm regularization or ask your own question.

8
Can simple vector distance work as a SVM kernel?
1
SVM training method (or alg.)
6
Plotting the decision boundary of a kernel SVM (RBF)
1
Is the kernel trick unnecessary for for non-linear SVM?
8
Kernels in SVM primal form
2
Number of features in SVM Kernel matrix