Area Under the Precision Recall curve -similar interpretation to AUROC?

I am trying to interpret the AUCPR. Say I have the following Precision-Recall curve.

Firstly: It ends at 0.38 on the y-axis because this particular plot has slightly imbalanced data, so am I correct in thinking its the sum of the positive class / the sum of the negative class.

Secondly: In regards to the AUCPR. I understand that perfect accuracy would be a straight line going along the top of the plot but if this curve had a AUCPR of 0.90 then it would be considered good, however how can I interpret it when the value is perhaps 0.50, this couldn´t be a random guess like in AUROC since the curve ends at 0.38. Is there a way to know when the model becomes worse than flipping a coin? 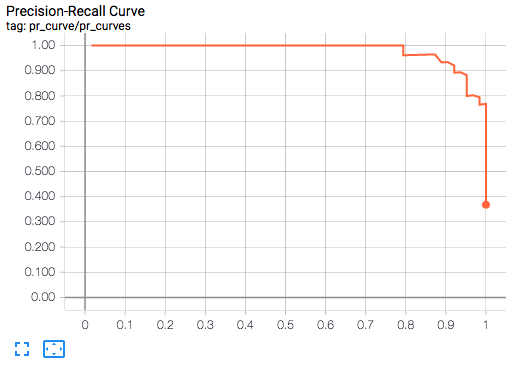 The PR curve has a simple geometric interpretation of the expected precision when uniformly varying the recall. It does have a 1-1 correspondence to the ROC curve as shown by Davis & Goadrich (2006) "The relation between precision-recall and ROC curves".

Regarding the specific side-questions raised:

Not the answer you're looking for? Browse other questions tagged machine-learning classification precision-recall or ask your own question.