I am trying to write a function which generates uniformly distributed noise which comes from a p-norm ball of $n$ dimensions:

I found possible solutions for circles ($p = 2$) (http://mathworld.wolfram.com/DiskPointPicking.html), however I have trouble extending this for different values of $p$.

I have tried doing it by just drawing a random sample from a uniform distribution, and redrawing when it does not meet the given constraint. However besides it being an ugly solution it also becomes computationally infeasible for high dimensions.

I found the full solution in a paper as suggested by kjetil b halvorsen (https://ieeexplore.ieee.org/stamp/stamp.jsp?arnumber=758215). I honestly have trouble understanding the math behind it, but the eventual algorithm is fairly simple. if we have $n$ dimensions, a radius $r$ and norm $p$ than:

Taeke provides a link to an article which the text below makes more intuitive by explaining specifically 2-norm and 1-norm cases.

You can use this result http://mathworld.wolfram.com/HyperspherePointPicking.html

A multivariate Gaussian distributed variable $X$ (with identity covariance matrix) depends only on the distance, or sum of squares.

Thus $\frac{X}{\Vert X \Vert_2}$ is uniformly distributed on the surface of the n-dimensional-hypersphere.

If instead you use the $n$-th root of a variable sampled from a uniform distribution, then you get an even distribution.

In this case you sample $X$ from the Laplace distribution instead of the Gaussian distribution and divide by the 1-norm. The $\frac{X}{\vert X \vert_1}$ is uniformly distributed on the n-dimensional 1-norm sphere.

I have no formal proof, just intuition

(since the pdf is independent from position, you will expect for any infinitesimal area/volume with the same 1-norm to have the same probability $f(x) dV$ and when you collapse this to the unit surface the same $f(x) dA$)

but testing with simulations looks good. 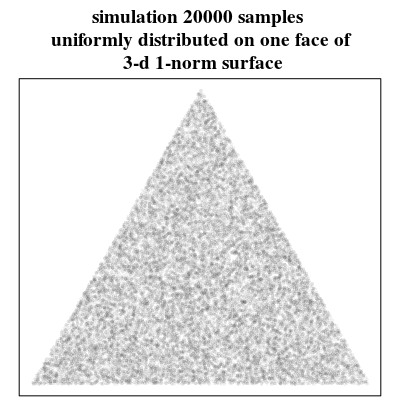 The distance goes similar as with the 2-norm case (the volume still scales as $r^n$).

In this case, if you wish to follow the same principle, you would need to sample from distributions with $f(x) \propto e^{\vert x \vert^p}$ (I hypothesize). These are generalized normal distributions and probably relate to the distribution $G()$ mentioned by Taeke.

Not the answer you're looking for? Browse other questions tagged simulation noise or ask your own question.

13
Generate data samples from Poisson regression
1
Generate vector in $\mathbb{Z}^3$ with fixed sum and uniform distribution
1
Removing gaussian noise from a time-series data
2
Generate Variables from Causal Structure for Simulation with Binary/Indicators
0
Is there a way to generate artificial data from clusters?
1
Generate random walk from a power spectrum