I have a set of questions regarding how HMMs are used.

Context: there is a stream of real numbers or real number vectors (e.g. data from a phone accelerometer) and the goal is to detect that an action has just happened based on the data from this stream. Only one type of action is considered, i.e. the device is either performing the action or not. An example of an action could be "drawing" a circle in the air with the device while not performing the action is, for example, just carrying the device in the pocket. I'm aware that there are other ways to do this than HMMs but I'm asking this question also to understand HMMs more so for the sake of this question please suppose that using HMMs is required.

I see two ways of doing this

Which of these ways is used in practice or which of these makes the most sense? What are the requirements for training data for each of the above approaches (provided they both make sense in the first place).

I'm a total newbie in HMMs so if the questions are weird or very basic, you know why. Thanks for any answers that help me shine light on these issues.

To answer each of the questions in your post:

As I have mentioned in the comments above, unless I am misunderstanding, your description of "multiple HMMs" is likely inaccurate, and certainly inappropriate for the problem as you describe it. It seems to me that when you say "multiple HMMs" you are referring to what are usually called "multi-stream HMMs". Multistream HMMs have multiple output processes; i.e. multiple streams of OBSERVED variables. In speech recognition, this is represented by multiple modalities (acoustic features, phonetic features, syntactic features, and in some contexts things like facial expressions, etc.). The idea is that you are trying to extract information on some finite set of latent features based on information across these multiple observed modalities. This does not sound like your context, to me.

You have a single stream of observed information, by which you are trying to infer information on a single latent feature (the occurrence of an action). It doesn't make sense to me, as the problem is described, to try and fit multiple HMMs to this structure. In fact, that model wouldn't be identified. Action and non-action are not independent states, since one is a complement of the other; they are only describable by a single parameter (the probability of an action, since 1 minus this probability is the probability of a non-action).

No. Baum-Welch is simply an estimation algorithm. It is in fact the default for any simple HMM. Interpretation of the states has nothing to do with what algorithm is used to estimate the parameters; interpretation should be based on substantive knowledge of your data, and you should use this to inform how you construct your model.

Regardless, it sounds to me like you should start with a more basic overview of how training works in the context of HMMs. This thread has a number of useful links to papers and worked examples.

I will try to answer the questions separately below but would also refer you to a question I have asked on the subject some years ago, where - I believe - the setting is similar to what you describe. I will intentionally not repeat what is covered in that thread.

Which of these ways is used in practice or which of these makes the most sense? What are the requirements for training data for each of the above approaches (provided they both make sense in the first place).

In brief, for the event detection setting I have tried both the multiple HMM and single HMM approaches and did not get very far. Conceptually HMM's are more suited for settings where the states themselves are latent / hidden and you do not actually have intuition of what they may / may not represent; how many states there are etc. Put more succinctly, an HMM is an unsupervised learning algorithm with a temporal dimension.

In most cases it is just a Gaussian Mixture model with a state-transition component in the likelihood function. A very good reference on this is Pattern Recognition and Machine Learning by Chris Bishop, chapters 9 and 13.

The Baum-Welch training uses only the observations and the state model is fitted to the observations, i.e. there is no clear interpretation of what the states actually represent. Therefore it cannot be used for the single HMM approach, am I correct?

Baum-Welch is just the EM algorithm in this context, you use it to fit a single HMM, for multiple HMM's you would need to repeat the process. You can also try to fit a HMM (as you can any model) by using a stochastic optimisation process like MCMC, etc. In an HMM there is no clear representation of what the states represent not due to Baum-Welch but due to the unsupervised nature of the approach. In other words, you are just temporally clustering similar observations, taking also into account how they transition between themselves. Theoretically, there is no guarantee that the results of the clustering will align with your implicit labelling (event / no event). You can force it to do so by feature-engineering, but then you are trying to fit a solution to a problem it is not originally meant for IMHO.

If I wanted to use the single-model approach (provided it makes sense at all) I would need to actually know the hidden states of the system for the training sequences, am I correct?

If you knew the hidden states, they are not hidden. The very discussion of event/non-event resonates with supervised labelling. One commonly encountered issue in this context is the large imbalance in the number of event versus non-event observations. Events are usually rare occurrences (like in my question).

If it is possible to label the training sequence(s) with the state (or what I think is the state), i.e. an in-action state and not-in-action state, or even action-is-starting, in-action, action-is-ending and non-action states, how would I train the single HMM?

As mentioned above, form the moment you are talking about labelling, you would be better off, especially if your events are fixed lengths, by using a classifier with temporal features (e.g. going back x number of timesteps). Even more suitable are the weight sharing neural network algorithms like recurrent neural networks as you point out or convolutional neural networks (not just useful for image processing) with varying window/convolution sizes.

Philosophically, "event" means the sharp change of state. So an "event detection" would mean detecting some transition with low probability.

Whatever terms people use, you can see the isomorphic structure.

In your description, "event" seems to mean actually a specific state. It's unnecessary to create a lot of parameters if it is already enough to describe your problem. 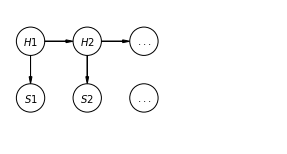 so at each time point you have a hidden sate which can take value "Event" or "Non-event". Between adjacent hidden states a transition matrix $A$ parametrizes $P(H_{i+1}|H_i)$ with higher probability to stay in the same state and lower probability to change (the usual sense of "event").

Probability density distributions of signal under hidden state "Event" and "Non-event" are different. Which means $p(S_i|H_i=Event)\neq p(S_i|H_i=Nonevent)$. We call it $B$.

$\pi$ specifying the probability with which value $H_0$ takes.

You have all the $S_i$ observed. What left is to find the most likely sequence of $H_i$. It gives you the highest joint probability which you can get by applying chain rule.

Each $H_i$ corresponds to one time point, but it will form chunks given the way you specify $A$ (more likely to stay than change). Starting and ending of actions are essentially the first and last action hidden state in a row.

You can of course also call $p(S_i|H_i=Event)$ and $ p(S_i|H_i=Nonevent)$ two different models. Then I think your two ways mean the same thing.

Not the answer you're looking for? Browse other questions tagged hidden-markov-model signal-processing or ask your own question.