How to determine whether data is slightly or extremely non-normally distributed?

I'm a PhD student and doing a research on regression analysis.

My question is how to determine whether the data is slightly, moderately or extremely non-normally distributed? 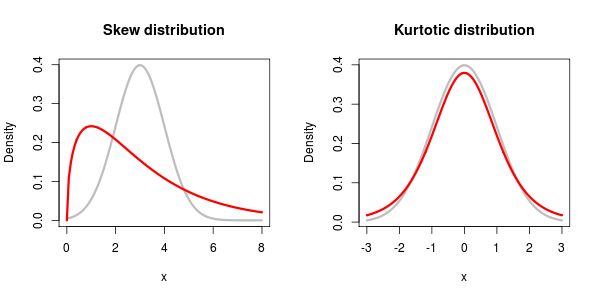 So, why use skewness and kurtosis as quantifications of non-normality? The main reason is that they affect the asymptotics of the central limit theorem, which as you may know often can be used to motivate the use of a statistical procedure (that is based on normality) even if the data does not come from a normal distribution, given that you have a "large enough" sample. If either the skewness or the kurtosis is high, larger sample sizes are needed for such motivations to be valid.

I think the other answers really address methods for deciding non-normality. But I think the OP asks a different question. Basically he is asking about how to decide once normality is rejected how do you determine the severity? If it is mild perhaps the deviation can be ignored. Skewness and kurtosis can be looked at as measures of non-normality but I think it comes down to a subjective decision as to how large a difference should be to call it, mild, moderate or large. I think the point is that this decision can be made by looking at histograms, qq plots, or the magnitude of the skewness and kutosis. But this is going to be subjective and not formal.

Although a wikipedia link might be not considered extremely helpful, the list of methods for testing normality is quite long.

The methods range from (already mentioned) histograms and qq-Plots if you want to stay on the graphical side over more lets say "empirical tests" (multiple sigma events in relation to sample size) to parametric and nonparametric statistical tests. A complete review of these would be, in my opinion, out of scope here (and for some methods definitely also out of my scope) so I will be quite frank here.

Since you were mentioning regression analysis I guess you want to test the normality of the residuals. Just use one of the normality tests on the wiki page. The more popular variants compare skewness and kurtosis to that of a normal distribution. The nonparametric versions are Kolmogorov-Smirnov type of tests that use the empirical cumulative distribution function of your data (probably the residuals). Just look at the wiki page. The standard tests are quite simple to implement.

Hence you will be better off by running some Normality Tests. The Shapiro-Wilk is a sensible choice for univariate data.

If you use R you will find the function shapiro.test() in the stats package useful. The moments package includes the functions skewness() and kurtosis() plus jarque.test() if you want a second opinion after the results of the Shapiro-Wilk test.

Here I found some rules of thumb on how to evaluate.

Not the answer you're looking for? Browse other questions tagged distributions normal-distribution normality-assumption or ask your own question.

303
Is normality testing 'essentially useless'?
5
Can one measure the degree of empirical data being Gaussian?