Is it possible to build a more "controllable" decision tree like below?

I have 2 real and 1 discrete input variable whereas the output variable takes either of the 2 nominal values (i.e. 2 class problem). First I used Weka to train C 4.5 decision tree in a 10-fold cross validation setup. As a result I get a single decision tree whose True positive, False positive rates don't change much with the pruning factor.

What I want is a single variable whose value I can threshold (in addition to class identified by decision tree) to do classification. At the same time, I want readability of decision trees.

Is it possible to do this with regression trees ? Any starting points ? 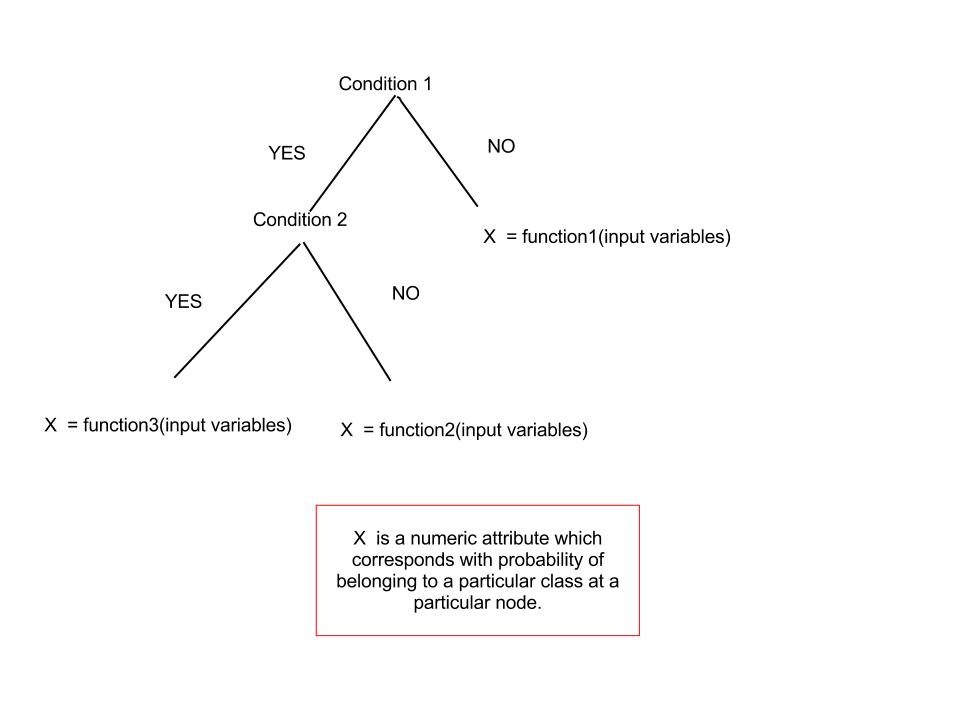 It sounds like you want to use a method such a LMT (logistic model trees) or perhaps Joao Gama 's functional trees. The former uses standard decision tree splitting criteria at the interior nodes and additive logistic regression functions at the leaves, and the tree is pruned using the CART pruning method. The latter also can have logistic regression functions at the leaves and also at the interior nodes (for oblique splits). Weka has implementations of both: weka.classifiers.trees.LMT and weka.classifiers.trees.FT.

Additional to the procedures suggested by @Mark Hall there also is the work of Loh e.g. LOTUS and GUIDE as well as of Zeileis et al. MOB. As compared to functional trees and LMT, these algorithms come from the statistics literature and use ideas of statistical inference for tree induction. Their distinguishing features are that they are more or less "unbiased" in split variable selection ("biased" here means that if there is no real association between the response and the predictors, predictors with more possible split points have a higher probability to be selected for the split. This bias appears in algorithms like C4.5 and CART and derivatives like LMT and Gama's trees). Unbiasedness is desirable if the tree is to be interpreted, rather than just used as a machine for predictions. See this paper or this thesis for a comparison of some of the mentioned algorithms and what they can do or what they are good at.

Now, what to use? I'm not exactly sure what you mean by "$x$ is a numerical attribute which corresponds to a probability of belonging to a particular class at a particular node", but if you want to regress given relative frequencies or estimated probabilities in the nodes, you can use a MOB with a beta regression model in the nodes, if you have a binary/k-ary outcome to be regressed you can use either LMT (I would not recommend it due to experience), LOTUS or MOB with binary/multinomial logistic regression.

Not the answer you're looking for? Browse other questions tagged r regression cart weka or ask your own question.

0
Trying to run statistical tests in R but struggling as I am new to the language
18
Regression tree algorithm with linear regression models in each leaf
5
Questions about decision trees
4
Decision tree: What is the most important next feature?
3
Outlier removal before Boosted Decision Tree Regression
1
How to binarize data for FP Growth in Weka?
1
Does "adding nodes one" mean "adding a layer of nodes"?