I am new to using R-project, I started using the programming language due to the ease of cross-validation package caret. However, I'm stuck at translating the predicted probability values into the original practical values.

Description: We have pedal power data from 45 unilateral vascular patients and 25 healthy participants and we want to predict the cut-off point at which people have vascular problems. I've used a 10-repeated 10-fold cross validation ROC to get the optimal (young method) cut-off point with general linear models.

Problem: The ROC-curves looks fine, he result I get is a cut-off point of 0.273, but this value doesn't make sense (see plot). This cut-off point is based on the prediction probabilities due to resampling. If I would make an ROC curve in SPSS for example (without cross-validation) the cut-off point is around 5 watts. This means that a pedal power difference between both legs of 5 watts is a predictor for vascular problems. What I would like to have is the cross-validated cut-off value in original pedal power values.

Question: How do I acquire the cut-off point values in original pedal power values?

Thus, the pedal power difference at which people have vascular problems? 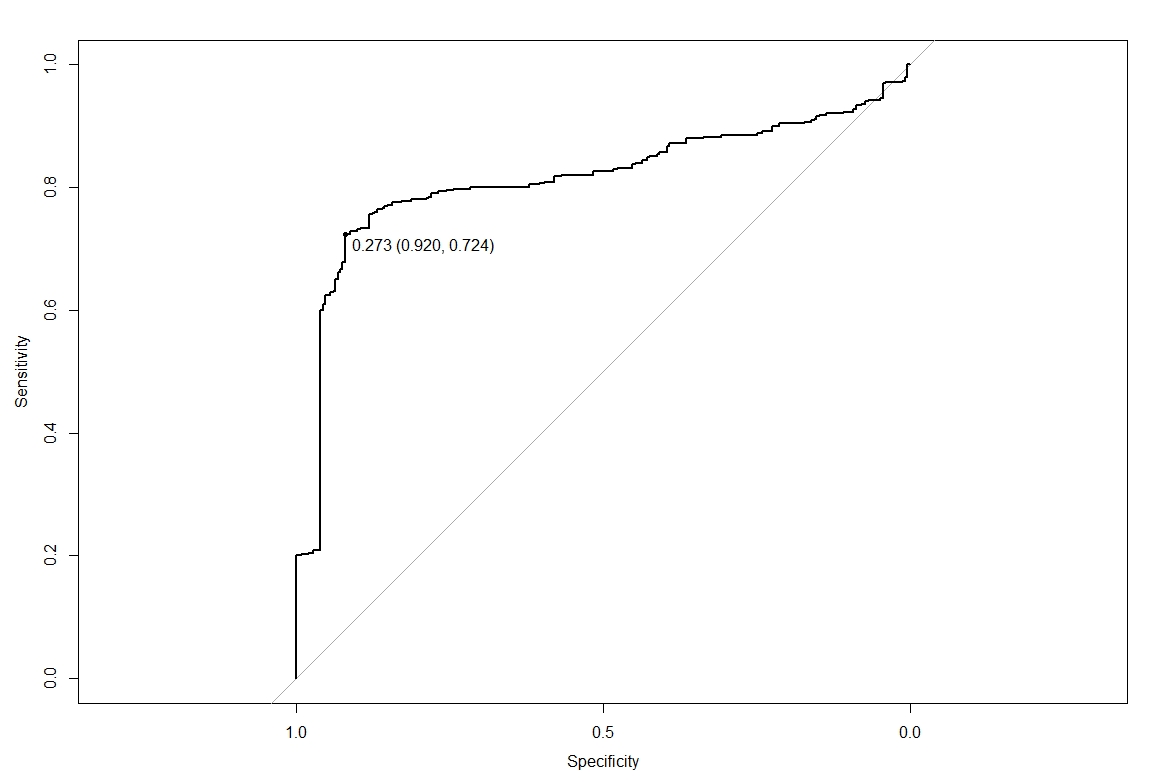 I think you confuse the prediction cut-off values (here: patient) with the cut-off value for your x-variable (here: pedal power).

If you take a look a the final model:

Your next challenge will be to decide on the cut-off for your prediction. You can do this for example by looking at the ratio false negatives / false positives (confusion matrix).

Not the answer you're looking for? Browse other questions tagged r roc caret or ask your own question.

4
Computing by hand the optimal threshold value for a biomarker using the Youden Index
11
Cut-off point in a ROC curve. Is there a simple function?
3
Getting the optimal age cut off
3
ROC curve for two-sided cut-off
1
Optimal cut-off calculation in logistic regression
1
Optimal cut-off point with minimum sensitivity
5
How is the optimal probability cut-off in a ROC defined by the R package Epi?
1
Using An ROC Curve to Evaluate a model